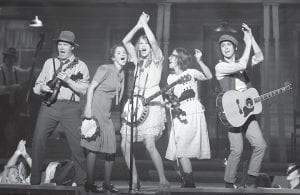 Taylor Swift might not be able to count on the men in her life, but her fans have yet to let her down. And now they have rewarded her with one of the biggest prizes in country music — The Academy of Country Music’s entertainer of the year award.

A record of nearly 600,000 voters participated in selecting this year’s winner of the academy’s most prestigious award, the only major award determined by fans. Swift’s crew came through for her on a night when the industry and her peers rewarded firecracker Miranda Lambert with four trophies.

“I feel like of all that has happened to me in my life, that’s the best thing I’ve ever gotten to have,” the 21-year-old Swift said after the awards show. “My relationship with them is everything to me.”

Fans could vote during the show and her spirited performance of “Mean,” a rebuke to her critics on which she played banjo and nailed the vocal performance, probably led to a spike in voting. Swift, known for detailing her broken romances and the men who have wronged her, credited a quartet of men who have done her right. She thanked Brad Paisley and Keith Urban — who were among the five other nominees in the category — along with fourtime winner Kenny Chesney and Tim McGraw for taking her on the road before she became an international sensation and showed her how to do it.

“I see those people when I think of entertainers,” said Swift, who will perform in Lexington and Louisville later this year.

Lambert, also an entertainer nominee, had few expectations after topping the ACMs with three wins last year on the strength of her aptly titled album “Revolution” and the song “White Liar.” She had no idea she would top all nominees with seven this year.

It turned out that her poignant song “The House That Built Me” would be an even bigger hit than “White Liar,” though.

Written by Allen Shamblin and Tom Douglas, “House” won song, single record and video of the year with the 27-year-old Lambert sharing in all those wins. It mirrors a difficult time for the singer’s family, but those times are over and the song has helped Lambert’s star rise to new heights. She also won her second straight ACM for top female vocalist.

As last year’s album of the year winner she got to hand out the 2011 award to close friends Hillary Scott, Charles Kelley and Dave Haywood of Lady Antebellum, who won for their breakthrough “Need You Now.” The trio openly campaigned for Lambert’s “Revolution” last time around and told the crowd they were glad it was out of the way as they picked up three trophies, including their second straight top vocal group award.

“ Thank you, Miranda Lambert, for winning this last year and not being in the category this year,” Lady A’s Charles Kelley quipped.

It wasn’t necessarily a surprise that Lady A won the award given the strength of that album since its release in January 2010, but it beat out an impressive list of stars that included Swift, Chesney and the Zac Brown Band.

“Everyone in the category made such an incredible album,” Scott said.

“We own all of them,” Haywood said.

Among the evening’s most surprised winners was Paisley. He had won the top male vocalist award four times in a row, but after Blake Shelton beat him at the Country Music Association

Awards back in November, his money was on Shelton, who co-hosted the show with Reba McEntire.

“This win felt almost like that first time,” Paisley said, adding: “I’ve lost a lot of money this evening and not at the gaming tables. I really thought, ‘That’s it.’”

Sugarland won its second vocal duo of the year award, The Band Perry took home two trophies, including top new artist, and Zac Brown Band and Alan Jackson won top vocal event for their collaboration on “As She’s Walking Away.”

While the awards are the point of the show, there were a number of blockbuster performances that featured unexpected mashups. Paisley kicked things off with a raucous performance of his new song “Old Alabama” with members of the iconic country supergroup Alabama. Steven Tyler and Carrie Underwood rocked out to “Undo It” then segued to the Aerosmith classic “Walk This Way.” James Taylor, who Brown calls his greatest influence, joined the singer’s band on a medley of “Colder Weather” and “Sweet Baby James,” and Rihanna, sporting a flaming reddish-orange pixie haircut, performed her song “California King Bed” with Sugarland’s Jennifer Nettles.

“She is a wonderful performer,” Nettles told reporters later. “Obviously, country music is hip and it’s cool and it’s fresh, and I think her being here tonight is even more testimony to that.”