Fans search for answers to final season of ‘Lost’ 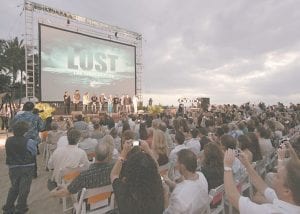 Beachgoers are seen at the Lost premiere on Waikiki Beach in Honolulu. Lost, which is filmed in Hawaii, has returned to television for its sixth and final season. (AP Photo)

What is that black smoke monster? Will Jack’s plan to rewrite history work? Will Sun be reunited with Jin? Will the real Locke please stand up? What happens to the island? What does it all mean? How will it end?

Thousands of fans traveled from around the world to the home of “Lost” in a quest to get some answers to the questions that have piled up in the first five seasons. And they finally got what they were searching for — sort of.

A crowd of about 12,000 — some wearing bikinis — on Waikiki Beach were treated over the weekend to a special screening of the season premiere, which aired Tuesday night on ABC and kicked off the sixth and final season of the castaway drama.

Stars and directors of “Lost” made an islandstyle, red-carpet appearance and bid “aloha” to the fans and each other.

Actor Josh Holloway soaked it all in amid a chorus of screaming, photo-snapping women packed 10 deep behind metal gates.

“It’s like being in high school. It’s like being a senior — getting near the last days of school,” said Holloway, who stars as hunky, bad-boy Sawyer.

In 16 episodes including Tuesday’s, the emotional journey will be ending for the characters and actors, most of whom were unknown before “Lost.”

“I was a struggling actor in the U.K. I came to Hawaii and now I’m on a hit show, so it’s changed my life totally,” said Henry Ian Cusick, who plays Desmond.

Nestor Carbonell, who plays Richard, the ageless Other, called it “an incredible ride,” that he’s not so certain he wants to end.

Jorge Garcia, who portrays the tormented Hurley, said he’s pretty sure he’ll shed a few tears when it’s all over.

“Right now, it’s just a lot of appreciation and savoring the moment,” he said. “I think when that last script gets dropped off at my house, that’s when the sadness starts.”

Evangeline Lilly, who stars as sexy jailbird Kate, said it’ll be an “end of an era” for her personally. She was 24 when she joined the show and will be 31 when the show wraps this summer.

“This show has carried me through some signifi cant years and I’m going to miss it,” she said. “I’m also excited. I’m excited for the freedom and opportunity it’ll bring. But it’ll be bittersweet.”

ABC Entertainment President Stephen McPherson said the loyal and passionate fan base of “Lost” is a testament to the creative writing and compelling characters.

“It’s captured people the way no other show has captured them,” McPherson said. Viewers are passionate about other ABC series including “Grey’s Anatomy” and “Desperate Housewives,” he said, but “Lost” has a diff erent “sense about it,” with fans drawn in by its exploration of personal reinvention and discovery.

Even as head honcho, he said, he doesn’t know how it’ll end. The actors are also left guessing.

“I’m in a state of confusion,” said Michael Emerson, who plays creepy Ben Linus. “Some big chunks are falling into place every week, but still I don’t know where it’s going. I thought midway through (filming) the final season, I would be able to begin to see the end. It’s not the case.”

Co-creator and executive producer Damon Lindelof is one of the few people who knows how it’ll end and what questions will be resolved.

“This is a character-based show. We care more about emotions, motivations and ultimate destinies of the people. We don’t care about who built the statue.”

Last season ended with Jack (Matthew Fox) deploying a nuclear warhead that, if things went as he hoped, would rewrite history by destroying a huge pocket of electromagnetic energy that may have been responsible for crashing Oceanic Airlines Flight 815 into a mysterious South Pacific island. If Jack’s plan works, the plane could make it to Los Angeles as scheduled. If it doesn’t they’ll still be on the rock.

“For Jack, ultimately it’s going to be about a sense of redemption, a catharsis and sort of finally letting go and fulfilling what his destiny is,” Fox said. “He’s finally gotten to the point where he’s ready to do that.”

“The audience has been kind of looking for that for a while and I’ll be surprised if that didn’t happen,” Kim said.

There will be several characters returning during Season 6, including Claire, Michael and Libby.

But what does it all mean and how are all the stories tied together?

“I have no clue. But I like it that way,” Garcia said.

Lilly believes the show is about “redemption and about the tug-of-war between faith and science.”

“I think it’s probably ultimately trying to say, that tug-of-war is two ends of the same rope. That’s my interpretation,” she said.

The show first aired on Sept. 22, 2004, with the unforgettable airplane crash on a mysterious island that got stranger by the episode.

When the curtains are finally lowered and filming ends in April, the actors say they’ll miss working with such a large and diverse cast that has grown to become very close. They’ll also miss Hawaii, which has provided the stunning tropical backdrops. “Lost” is the most successful TV series to be shot in the islands since “Magnum P.I.” (1980-88).

“I’ll miss being on a beautiful beach at sunrise or working at Makapuu or Kualoa or Makua Valley, just places with such staggering beauty that you think, ‘No one should get paid to work here,’” said Emerson, who won an Emmy last year for best supporting actor.

Some of the actors plan to stay in Hawaii. Others will move back to Los Angeles, take time off or concentrate on film. Fox, who is building a home in Oregon and will spend some time with family, said he’s done with television after two series that lasted six seasons a piece.

Garcia said he’s unsure what’s in store for him.

“I’m going to have to go back to civilization and see what my next adventure is,” he said.