‘Fantastic!’ is how Letterman described effort by The Whigs 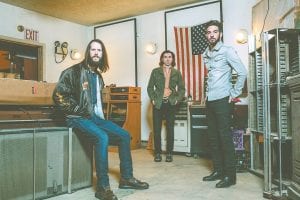 The Whigs are, from left, guitarist/vocalist Parker Gispert, drummer Julian Dorio, and bassist Tom Deaux. The band will perform Saturday in Whitesburg at Summit City. (Photo by Joshua Black Wilkins)

“Man, that was great! Fantastic!” exclaimed late night TV host David Letterman after The Whigs performed the single “Hit Me” on “The Late Show” on CBS recently.

The Whigs, a power trio from Athens, Georgia, have toured the world with the Kings Of Leon, The Black Keys and The Hold Steady. They’ve also captivated television audiences with stage-stealing performances on every late night TV show, including the aforementioned appearance on Letterman in May, just after the release of their fifth highly regarded album in 10 years of performing together.

After enjoying a short break from touring, The Whigs are returning to the road later this week in support the new album, Modern Creation, and will perform in front of audiences in Whitesburg, Columbus, Ohio and Brooklyn, New York before beginning a 22- date cross-country tour with Social

Distortion. Included along the trek is a performance at Chicago’s “Riot Fest” in mid-September that will feature bands such as The Cure, Cheap Trick, Dropkick Murphys and Jane’s Addiction and solo performers such as Patti Smith and Paul Weller.

The Whigs’ Whitesburg show will be held this coming Saturday night (August 9) at Summit City. As has become the norm with rock bands with large national followings that agree to play in Whitesburg, the town and venue are by far the smallest in which The Whigs will play during this tour that is scheduled to end in mid-October. Admission to Saturday’s show is $18, and persons wishing more information about the event may call Summit City at 633-2715 or promoter Greg Napier at 606-434-8648.

With Modern Creation, released in late April on the New West label, the Athens-bred/Nashville based power trio wanted to find the exact midpoint between raw and rehearsed. After more than a decade together — during which they’ve released four other critically lauded studio albums and toured constantly as either headliners or openers for the likes of the Drive-By Truckers and MGMT — the three members all agreed that they wanted to flex their muscles a bit: write some good songs, get them down as tight as possible, hit “RECORD,” and let it rip.

Unlike previous albums, the band went into the studio and recorded all 10 tracks live with limited takes and relied on band performances instead of studio tricks piecing together individual performances.

“Recording live became a goal for us early on when writing the record, before we even started composing the songs” says guitarist/ vocalist Parker Gispert. “We didn’t want the record to sound over-thought and the only ways we knew how to really produce that sound would be to not get tedious about it and to not give ourselves time to over think it.”

While writing and rehearsing the songs for the new album, The Whigs’ infamously raucous live show was never far from their minds.

“Our practice space actually has about a foot-high stage,” says Julian Dorio (drums), “and we set up like we’re playing a show. We know we’re going to spend a lot of time on the road touring, so it’s always more fun to write something that’s going to sound exciting live.”

In the fall of 2013, the trio headed west to record with Jim Scott at his PLYRZ Studio in Valencia, California, about 30 miles northwest of Los Angeles. Scott has helmed albums by Tom Petty, Wilco, and Matthew Sweet, among many others, and his experience proved invaluable.

“Guys like Jim have made hundreds of records and they’ve seen bands do the same stuff,” says Gispert. “He’s seen bands make mistakes and he’s seen bands capture some really great material. I felt very comfortable in his hands.”

With Scott in their corner, The Whigs worked hard to make sure these songs didn’t sound worked over. Rather than track each instrument individually, the band captured most of the songs in first or second takes, playing together live in the studio. Or, as the case may be, just outside the studio. Bypassing the studio proper, they set up shop in the hangout area at PLYRZ: a cavernous room where most artists spend their time eating, listening to records, goofing off, and just chilling out. For the Whigs, however, it became their creative headquarters.

“It has a real clubhouse vibe,” says Tim Deaux (bass). “Jim’s quite the collector of artwork and memorabilia. He’s got neon signs and weird posters and tied-dyed tapestries hanging on the walls. There’s a motorcycle in one corner, and there’s a Dolly Parton pinball machine.”

In addition to amps, keyboards, and guitars galore, there is also an elaborate stereo system next to Scott’s sprawling vinyl collection — a veritable rock history at the Whigs’ fingertips. And then there’s Scott himself, who acted the part of both producer and professor. He regaled the trio with industry war stories, and they soaked up everything. Recalls Gispert: “It’s an invaluable reference to work with someone who’s recorded artists that have influenced us. If we want to know how they got a particular sound, we can simply ask.”

Modern Creation is packed with playful allusions to rock’s past, yet the band isn’t playing to their record collection. Rather, these new songs digest a range of influences and spit them back out as something new, exciting, and idiosyncratic. In other words, they’re working hard to show their range as a power trio, both in the studio and (when they hit the road this week) on stage. That may be the secret to The Whigs’ longevity: Being a power trio means every member has to pull his own weight.

“ Nobody can lurk or hang back,” says Dorio. “Everybody has to be contributing or else it’s going to fall completely flat. You can’t have a weak link. This is the rawest rock record we’ve made so far. It’s the truest representation of the band.”

Spin magazine called “ Hit Me,” the lead track on Modern Creation, “triumphant.” Another music magazine, Magnet, gives Modern Creation a rating of eight of 10 stars, exclaiming that the album “is big, buzzy guitar pop that is as timeless as it is timely.”

• To hear the song “Hit Me” as it appears on Modern Creation, visit this web address: www.spin.com/articles/whigs-hit-memodern creation/

• To view The Whigs’ performance of “Hit Me” on the “Late Show with David Letterman,” visit: youtu. be/nsgU8MylGCc