‘Farmer Wants a Wife’ a hit for CW 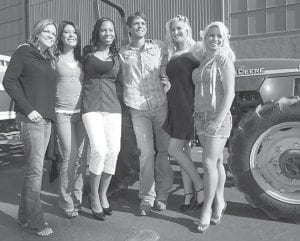 The glossy, big-city world of “Gossip Girls” is far afield of the modest, small-town doings of “Farmer Wants a Wife.”

Logic dictates that the ratings gap between the two CW shows – the highly promoted, buzzedabout “Gossip Girls” and the largely under-the-radar “Farmer” – would be vast.

But it turns out that “Gossip Girls” has averaged nearly 2.6 million new-episode viewers for the season, while the reality dating show has posted close to 2.2 million so far, according to Nielsen Media Research.

Like other scripted series, “Gossip Girls” was undercut by the 100-day writers strike that interrupted production. And “Gossip Girls” did attract its second largest audience yet, an estimated 3 million viewers, for its recent finale.

Neither it nor “Farmer” has reached the CW blockbuster status of “America’s Next Top Model,” which averaged up to 4.8 million viewers this season.

But “Farmer,” the reality show about Missouri farmer Matt Neustadt’s quest for a bride, has been a solid country cousin. It’s outdrawn other, hipper former occupants of its 9 p.m. EDT Wednesday slot on CW, including “Pussycat Dolls Present” and “Beauty & the Geek,” in both total viewers and the advertiser coveted 18-to-49 demographic.

“Farmer” continues this week, with four episodes to air and six women angling to hang on for the June 25 finale and maybe an engagement ring.

So does rural America rock, or is it just this particular farmer – who’s been depicted driving his tractor shirtless, the better to display his buff bod – the draw?

Both, according to executive producer Cara Tapper.

Neustadt is a “good-looking, smart guy. … He wanted to make sure people saw farmers aren’t a bunch of hicks, that there’s sophistication there” as well, Tapper said.

The show has the same respect for rural life, the producer said, as it does the women whom Tapper said are sincerely vying for Neustadt’s affections. There’s also a fair amount of TV exposure, of course – and just plain exposure, although modest enough for episodes typically to be rated TV-14.

One episode had an outdoor shower scene, with the ladies washing off after getting down and dirty with pigs. Another allowed them to slip into bikinis for a group date at the local swimming hole.

“It is a sexy show, but in a really clean way,” Tapper said.

The format has an international track record. Versions have aired in the United Kingdom, France, Finland and elsewhere with respectable or better ratings.

How the U.S. show from FremantleMedia North America (“American Idol”) ultimately fares has yet to be seen: Will the farmer get a wife, and will “Farmer Wants a Wife” get a second season?