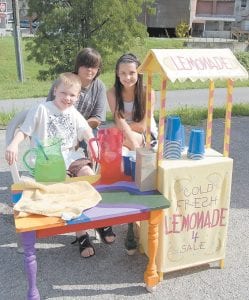 Profits gained from selling locally grown produce at a farmer’s market is supplementing income for some in Letcher County.

David Fisher, of Little Cowan, started farming after the plant in which he was employed as an oil field worker shut down last year.

For the past two Saturdays, Fisher and his wife Kae have sold produce in downtown Whitesburg at the Letcher County Farmers’ Market, which is located in the free parking lot near Mountain Heritage Village.

The Fishers sold cabbage, zucchini and other vegetables as well as herbs and jars of pickles.

The Fishers are participants with Grow Appalachia, a project headed by the Cowan Community Center that helps families till gardens and plant, grow and harvest produce. Organic fertilizers and other gardening materials are supplied to participants of the Grow Appalachia program. The project is funded by billionaire John Paul De- Joria, cofounder and chief executive officer of hair care products giant John Paul Mitchell Systems Inc. 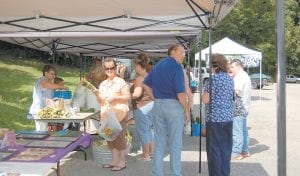 Donald Maggard, of Viper in Perry County, is also a Grow Appalachia participant. Maggard sold carrots, blackberries, goose beans, lab beans and potatoes at the farmer’s market on July 13. He sold out of some items at the farmers’ market on both July 6 and July 13.

Shad Baker, an agriculture agent at the Letcher County Extension Office, owns about 700 blueberry bushes on about two acres of land on a reclaimed strip mine site in Pound, Va. Although not all of the bushes are producing berries, he has been successful in growing and selling blueberries at the farmer’s market. The sweet variety he grows is called Sampson and it isn’t available in stores. Baker has sold more than 10 gallons of blueberries at the farmer’s market.

“I think it is a wonderful idea,” said Baker. “It’s a good social activity for people and it encourages supplemental income.”

Shelly Biesel, of Louisville, is spending the summer in Letcher County. She visited the farmer’s market on July 13 and was pleased with what she found.

“I’m actually a little bit surprised with how many people are here,” said Biesel. “I got everything that I need and everything looks real tasty. It’s good quality.”

In addition to fruits and vegetables, local artists and crafters have items for sell. Alice Craft of Little Cowan has sold crocheted items and fresh eggs. Artist Jeff Chapman-Crane had some of his artwork on display Saturday.

The Letcher County Farmer’s Market will be open from 9 a.m. until 1 p.m. every Saturday until October.