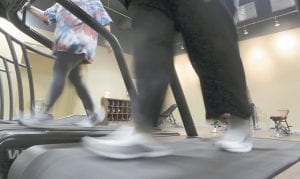 Gym members use a treadmill to warm up for a morning exercise class. A new study suggests that heavy seniors who want to lose pounds safely shouldn’t skip the weight machines or the treadmill. Losing weight plus aerobic activity and strength training improved the health of older obese people more than weight loss plus either type of exercise alone. (AP Photo)

Experts have worried about recommending weight loss to older, obese people because it speeds up bone and muscle loss, increasing the danger of falls and broken bones. Losing weight plus aerobic activity and strength training improved their health more than dieting plus either type of exercise alone.

The results suggest a combination of exercises is the safest approach, and may have big implications for helping people continue to live independently as they age. Medicare, the U.S. health insurance program for people 65 and older, now covers behavioral therapy for weight loss and some plans offer gym memberships.

“It is the worst of both worlds, being fat and frail,” said Dr. Dennis T. Villareal of Baylor College of Medicine in Houston, who led the study under a grant from the National Institute on Aging.

More than a third of Americans ages 65 and older are obese. Obesity can make the elderly vulnerable to medical problems, but losing weight can worsen frailty by hastening muscle and bone loss.

The study, published by the New England Journal of Medicine, involved 141 older obese people who were randomly assigned to a diet-and-exercise program. They scored in the frail range on a standard test used with seniors.

A control group didn’t diet or exercise and only attended monthly nutrition classes.

After six months, all the groups — except the do nothing group — had lost weight, about 19 pounds on average.

The health differences showed up in follow-up testing where participants did a series of nine tasks including picking up a penny, standing up from a chair and climbing stairs.

Most improved was the combination group with a 21 percent average increase in scores compared to 14 percent improvement in the aerobics-only and strength only groups.

Minor injuries such as knee pain and shoulder pain among the exercisers were not enough to outweigh the benefits, he said.

The study excluded people with severe heart disease and other serious health problems, so the results apply only to people well enough to start an exercise program.

“You get more bang for your buck with doing both types of training, especially when it comes to improving frailty scores,” said Dr. Lawrence Appel of Johns Hopkins University, who was not involved in the study.