As patients get larger, so do hospitals, equipment to treat them 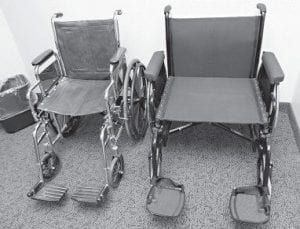 BIG WHEELS – An average wheelchair, on the left, sits next to one of the wheelchairs fitted for the Bariatric Program at Good Samaritan Health Center in Corvallis, Ore. (AP Photo/Corvallis Gazette-Times, Casey Campbell)

When Good Samaritan Regional Medical Center CEO Steve Jasperson looks over the books, one of the numbers that jump out at him is this one: $78,644.

That’s how much the 188-bed Corvallis hospital spent last year to rent beds, air mattresses, bedside commodes, wheelchairs and other specialty equipment for severely overweight patients. Often referred to as bariatric patients from the medical term for weight loss treatment, such people typically weigh at least 250 pounds and can weigh much more.

With nearly a third of adult Americans now considered obese, hospitals all over the country are taking similar steps and health care consumers are picking up the tab.

The costs don’t stop at rentals. Good Sam also has spent $60,000 to convert eight rooms into bariatric suites, with larger dimensions to accommodate larger patients and reinforced toilets that can support more weight.

The rooms also have ceilingmounted lifting devices to help get the patients in and out of bed. An additional 60 rooms have been equipped with the lifts at a cost of about $300,000, bringing the hospital’s bariatric expenditures to $438,000 and counting. 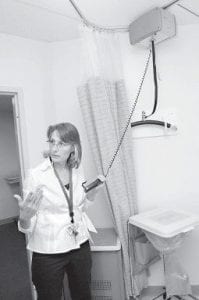 Bobbie O’Connell shows one of the lifts in a room at Good Samaritan Health Center in Corvallis, Ore. (AP Photo/ Corvallis Gazette-Times)

“Whenever we go in and remodel a room now, that’s a standard – at least a 500-pound lift that’s mounted to the ceiling,” Jasperson said.

The hospital has several lifts that can handle loads up to 750 pounds and some rated for 1,000. The emergency room has installed a lift, and local paramedics now routinely use lift-compatible body slings with heavier patients.

“We’re currently looking at getting a lift to help patients get out of their cars because the population’s getting bigger,” said Kathy Hale, vice president for patient care services at Good Sam. “That’s where we’re headed.”

The rising number of morbidly obese people has created a new medical specialty in bariatric surgery, with several procedures available aimed at limiting food intake. The total number of procedures topped 121,000 nationwide in 2004, according to the HealthGrades rating service, with costs ranging from $20,000 to $35,000.

Since Good Samaritan launched its bariatric program in 2004, the hospital has performed about 225 gastric bypass surgeries.

Located on the hospital’s fourth floor, the program office is designed with very large patients in mind. The extra-wide waiting room chairs, exam tables and scales are all rated for up to 1,000 pounds.

Patients used to squeezing into standard chairs or standing for fear of breaking them really appreciate furniture built specifically for them, O’Connell said.

“There’s a huge hidden cost to obesity that’s not seen by the average person,” O’Connell said. “It’s a problem a lot of people in health care are facing.”

A case in point is the Corvallis Fire Department. All its ambulances are equipped with gurneys rated for 650 pounds, but there are concerns that may not be enough. So the department has approached other mid-valley ambulance operators about splitting the $12,000-$14,000 cost for a 1,000-pound model.

“Just like the hospital, we are also looking at and currently struggling with how we deal with a bariatric population,” said Will Bauscher, chief of the department’s emergency medical services division.

While only the most severely overweight qualify for bariatric surgery, bariatric patients are rapidly increasing in the general hospital population. In fact, because of obesity-related illnesses such as type 2 diabetes, cardiovascular disease, gall bladder disease, sleep apnea and several types of cancer, bariatric patients are more likely to require hospitalization and tend to stay longer.

A new breed of medical supply company has sprung up to fill the needs of these patients.

One such firm is NewCare, a Shelbyville, Ky., outfit that sells and rents bariatric furniture for hospital and home care.

“It’s all we do,” said Keith Holmes, the company’s general manager.

Waiting room chairs are NewCare’s best seller. While standard models are typically 16 to 18 inches wide and can handle no more than 350 pounds tops, NewCare carries chairs that range from 24 to 30 inches wide and can support 500- to 1,000- pound loads.

Because they’re specialty items, the chairs aren’t cheap, with some models retailing for over $2,000.

While it’s still a niche market, Holmes said, the demand for bariatric medical furniture is growing steadily. His small regional firm, which serves central Kentucky and northeast Tennessee, used to get orders for about 10 bariatric beds a month. Now it’s not uncommon to get 60 orders a month.

Other companies are getting into the act as well.

Surgical instrument suppliers have begun offering longer forceps and other implements to deal with larger body dimensions, and other firms have jumped into the business of providing “disposables,” such as plus-size hospital gowns and blood pressure cuffs.

Such steps are necessary to accommodate the increasing numbers of severely obese people coming into the health care system, said Mike Dionne, a Georgia physical therapist who specializes in bariatric rehabilitation and has written a book on the subject, titled “Among Giants.”

Dionne advocates the widespread use of lifting devices, both for the safety and dignity of patients and to prevent workplace injuries among medical workers. He’s even taught seminars on bariatric care at hospitals across the country, including in Oregon.

But he also acknowledges that these measures are expensive and that the public inevitably shoulders the burden of those expenses.

According to the Centers for Disease Control and Prevention, U.S. medical costs related to obesity were as much as $78.5 billion in 1998, the most recent data available.

Roughly half those costs were covered by taxpayers through Medicare and Medicaid. Workers and employers picked up most of the rest of the tab by paying more for medical coverage.

Both the government and the private sector are fighting back, however.

The CDC has set a goal of cutting the national obesity rate in half by 2010 and has rolled out nutrition and exercise programs in 28 states, including Oregon. And business, which often pays the lion’s share of employee health insurance premiums, is beating the drum for wellness in the workplace.

Some insurers are even getting into the act.

Regence BlueCross BlueShield of Oregon, for instance, rolled out a wellness initiative for its own 6,000 employees and is now offering a similar program to its customers.

Dr. Ralph Prows, the company’s chief medical officer, said Regence has seen its own health care cost increases taper off and productivity rise as employees slim down, miss fewer days and get more done at work.

And while Regence may not be offering discounts to employers that aggressively promote wellness, Prows said companies will save money in the long run.

“It all isn’t about the price of premium today,” he said. “It’s more about what it’s going to be five years from now.”