Fatal mine said too crowded 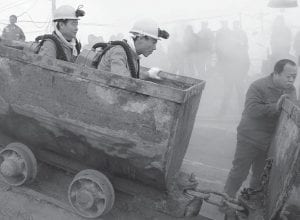 A coal miner helped rescuers ride a railway trolley as they headed into the site of a gas explosion at the Xinxing mine in Hegang, Heilongjiang province, China, on Sunday. The huge gas explosion in the northern Chinese mine is the deadliest blast to hit the beleaguered industry in nearly two years. (AP Photo)

The coal mine that exploded in northern China, killing 104, had too many workers underground in an effort to increase output, a government official said this week, exposing the risks often taken to meet the country’s insatiable energy demands.

The weekend gas explosion — China’s worst mining accident in two years — was a blow to the government’s recent efforts to improve safety standards in the industry, the deadliest in the world.

Grieving relatives, who wailed at the gate of the Xinxing mining office Monday morning, were shocked that such a blast could occur at one of China’s state-run mines, which the government has promoted as being safer that smaller, privately run concerns.

“We thought the state mines were safe. Why did he die?” Liu Shujiu asked a reporter who was allowed into the mining complex. Liu’s 38-year-old husband Zhang Shulai was among the victims. The couple have a 9-yearold daughter. “How do I tell her that her father is not coming home?”

But even as officials hustled to calm the families, miners idled near the shafts in their battered work clothes, waiting for word that their shifts might start again.

“Economic necessity,” one said, his words steaming in the frigid air.

China’s hunger for energy cuts closest to the bone in places like Hegang, an aging industrial city near the Russian border where the economy runs on coal. The country uses coal to meet three-fourths of its electricity needs.

Officials have said 528 miners were underground when the Xinxing mine exploded after a gas leak. Most escaped, but 104 were confirmed dead and an additional four were missing and feared dead, the official Xinhua News Agency reported Monday.

The head of China’s State Administration of Work Safety told the official Xinhua News Agency that the mine’s management failed to evacuate workers promptly, but his deputy went further.

The mine had too many platforms and workers inside in an effort to increase output, the deputy head, Zhao Tiechui, told Xinhua. He called the structure “far too complicated for its current ventilation system to work effectively.” He did not specify what the mine’s capacity was.

The candid comments just two days after the blast that killed at least 104 miners were a possible attempt to keep families’ frustration over the incident from turning into one of the many protests that the government sees as threatening stability.

The Xinxing mine’s director, deputy director and chief engineer have been fired, said an employee, who refused to give his name because he was not authorized to speak to the media.

Police and officials led shouting families into the mining offices Monday, where several of the women settled into wooden desks and started crying. Slogans urging mining safety were tacked to the walls.

One official, who would not identify himself, held up a list of miners’ names and tried to calm the crowd. “There are certainly dead. You don’t take it well, we know. But there’s a process. I feel as bad as you.”

The overwhelmed wife of a miner named Hou Yibin was laid across some chairs with an IV in her arm.

“She almost collapsed and hasn’t eaten for three days,” her husband’s brother, Hou Yitang, said later. “She has no job and now lives in a rented house. They have a 16- year-old girl who studies in middle school. We know the government will give the family compensation, but since the accident, no one from the coal mine has visited the wife and child.”

China has closed or absorbed hundreds of smaller, private mines into state-owned operations, which are considered generally safer. But some of the most deadly accidents this year continue to be at state-run mines.

The push for safety brought an 18.4 percent drop in mining accident deaths in the first six months of the year, from the same period in 2008.

A light snow fell Monday evening as Xinxing miner Wang Bao sat in a tiny restaurant across the street from the blast site, slowly getting drunk on beer. He worked the shift before the one when the gas exploded. “I’m the lucky one,” he said.