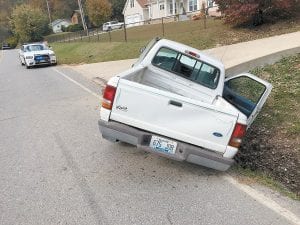 Authorities hope to learn soon whether a medical emergency may have caused a traffic accident around 12:30 p.m. Tuesday on KY Highway 7 near Isom. The Letcher County Sheriff ’s Department says James Gregory Hall, 56, of Camp Branch was pronounced dead at the Whitesburg hospital shortly after the pickup he was driving left the road and crashed into the edge of a concrete driveway. Deputy Sheriff Barry Engle said there is evidence that indicates Hall may have become disabled because of a medical issue before his southbound pickup left the roadway. Funeral arrangements for Hall, son of Velma Venters of Camp Branch, were incomplete at press time. Letcher Funeral Home, Whitesburg, has charge of arrangements.