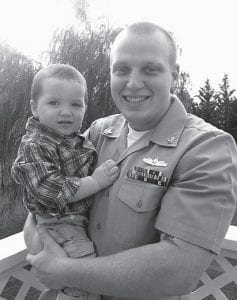 — Gunner’s Mate, Second Class Petty Officer (surface warfare specialist) Timothy Aaron Finn, U.S. Navy, is pictured with his son Timothy Aiden Finn, who celebrated his second birthday April 6. Timothy Aaron Finn scored 100 percent on his final test for vertical launching systems. Only one other person had ever scored 100 percent on this exam. During deployment, he was honored by the commander of carrier strike group 12 and Rear Admiral T.B. Kraft for superior performance of his duties while serving as a MK 45 5-inch gun technician about USS Bulkeley (DDG 84). During one firing, he quickly isolated and corrected a major weapon system fault, avoiding a casualty and loss of the ship’s main battery.