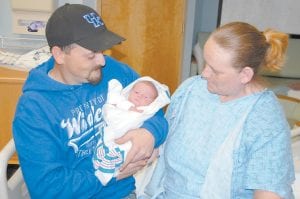 Draycen Cole Potter (center) was born at 10:51 a.m. on February 14 on the bathroom floor of his aunt’s house at Dunham. He weighed six pounds, one ounce and measured 18 inches long. John Potter (left) delivered the baby after Angie Potter’s water broke Thursday morning. An ambulance arrived shortly after the baby was delivered by his father. The Potters, who were photographed at the Whitesburg ARH, live at McRoberts.

A McRoberts man kept his wife calm and delivered their baby boy on the floor of a bathroom in a Dunham residence on Valentine’s Day.

Angie Potter ’s baby wasn’t due until March 5. She said other than stomach cramps, she wasn’t in much pain on Feb. 14. Potter didn’t think she was in labor until her water broke in her sister’s bathroom. She then yelled for her husband John. As he walked into the large, spacious bathroom, the head of the baby was crowning.

“He said ‘Lie down in the floor,’” said Angie Potter. “He kept it together until the paramedics got there and then he emotionally broke down.”

John Potter, a roof bolter who was laid off from his job with Arch Inc. in June, said despite being nervous, fatherly instincts took over and he was able to help his wife and child.

“We have a story to tell the baby of how he came into the world,” said Angie Potter. “The baby is doing great. God was watching over us.”

She said it is special that her husband delivered their baby, even though she never would have imagined him doing so.

“It was just very touching,” she said. “I really honestly didn’t think he could do it. He can’t stand the sight of blood.”

Angie Potter’s sister, Judi Taylor, called 9-1-1 and stayed on the phone with a dispatcher during the delivery. Draycen was born within five minutes after her water broke, Angie Potter said.

Members of the Fleming- Neon Fire Department had dropped off a patient in Payne Gap and were at Taylor’s residence six minutes after Taylor dialed 9-1-1.

“It took six minutes to get there and it seemed like six hours,” said John Potter.

“By the time (emergency responders) got there, we had the baby wrapped in a towel,” he said.

The ambulance driver cut the umbilical cord. Mother and baby were transported in the same ambulance to Whitesburg Appalachian Regional Hospital. Angie Potter was examined in the emergency room for about 15 minutes and then admitted to a room.

She said one of the emergency responders visited them in the hospital three times and brought baby clothes.

“They were excellent,” said Angie Potter. “They have really been great.”

Earlier on Valentine’s Day, the Potters had been babysitting a friend’s 17-month-old baby.

“I knew she wouldn’t holler at me unless something was wrong because I was putting the baby to sleep,” said John Potter. “The baby slept through the entire delivery.”

Angie Potter even vacuumed her sister’s living room floor about an hour before giving birth.

She said she doesn’t usually have much pain, which is good because she says she doesn’t have a high tolerance for pain.

She didn’t make it to the hospital when she had her first son, Randy, who is now 16, until she was almost fully dilated. The second son, Jonathan, who is 13, was born 12 days after his due date and labor was induced.

Unlike the birth certifi- cates for her other two sons, the newest addition to the family will have a birth certificate with John Potter’s name listed as the person who delivered the baby. Relatives visiting at the hospital on Friday were joking and calling him Doc.

Angie Potter said her son Randy called her earlier Thursday morning wanting her to pick him up from Jenkins High School early that day.

“I told him, ‘The only way I am signing you out today is if I go into labor’,” she said. “He was just being ornery.”

Her son got his wish and he and his brother got to leave school early that day.

Angie Potter said both Randy and Jonathan are honor roll students and she is proud of them.