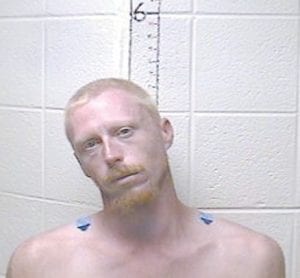 A two-year-old child died from injuries sustained in an all-terrain vehicle wreck in Jenkins on Sunday evening and the child’s father, who was operating the ATV, was charged with second-degree manslaughter.

Robert Anthony Sturgill, 30, of 156 Brickyard Hill, was operating the ATV on which his two-year-old daughter, three-year-old son, and a 17-year-old juvenile were passengers, said Jenkins Police Chief Thomas Bormes. Bormes said the ATV was not a side-by-side model.

“(The ATV) was going up a hill on a dirt trail and the four-wheeler flipped back and landed on one of the small children,” said Bormes.

Police were notified of the wreck, which took place on Brickyard Hill, around 8:25 p.m. on Aug. 26.

Two-year-old Alicia Sturgill was transported to Holston Valley Medical Center in Kingsport, Tenn., where she was pronounced dead. The body has been sent to Frankfort for an autopsy.

As of press time, funeral arrangements for the little girl had not been set.

In addition to manslaughter, Robert Sturgill, a sanitation worker for the City of Jenkins, was charged with two counts of first-degree wanton endangerment and operating a motor vehicle under the influence of alcohol/drugs (second offense).

Robert Sturgill admitted to police he had been drinking before the wreck, according to information contained in a written police citation. He is being held in the Letcher County Jail. Bond is set at $500,000 cash with the condition that Sturgill would remain under house arrest while wearing an electronic monitoring home arrest.