Father of 5 dies in mine mishap 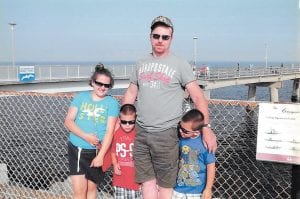 This photo shows Mark Wayne Frazier with three of his five children — daughter Katelyn Makayla Caudill and twin sons Mason Keith and Matthew Allen Frazier — during a stop at Chesapeake Bay Bridge-Tunnel in Virginia during family vacation. Funeral services for Frazier, 48, were held at Linefork on Tuesday, four days after he was killed in a mining accident in Harlan County.

Funeral services were held this week for a Linefork father of five who was killed in an underground mining accident in Harlan County.

Services for Mark Wayne Frazier, 48, were held at Linefork Tuesday, four days after Frazier was killed while performing maintenance work inside the Huff Creek No. 1 mine at Holmes Mill, near Evarts.

The state Division of Mine Safety said Frazier died “after being hit by fallen material,” apparently from a “rib roll.” The mine is operated by Lone Mountain Processing Inc., a subsidiary of St. Louis-based Arch Coal Inc.

“Rib” is the term used for a “wall” in underground mining. The federal Mine Safety and Health Administration describes rib failure, of referred to as a “rib roll,” this way: “As mining progresses, the loading on coal mine pillars increases as [the pillars] support the overburden load previously held up by the recently mined coal. Pillar rib failure can occur as the edges of the pillar yield under the excessive pressure of the overburden rock weight, and cracks or other natural defects cause sections to become detached and fall away.” 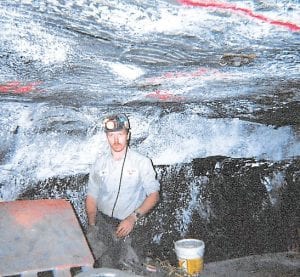 The accident involving Frazier, a continuous miner operator, occurred at 8:15 a.m. on March 25. Coal was not being produced at the time of the mishap.

The Division of Mine Safety said it sent its lead investigator and two specialists to the scene. The state’s top mining boss, Kentucky Energy and Environment Secretary Charles G. Snavely, said, “It’s a very sad time when any coal miner gets killed in the state of Kentucky.”

“I would like to offer my sincerest condolences to the Frazier family,” said Snavely, who was appointed to his post by Gov. Matt Bevin last December after serving a president of Eastern U.S. Operations for Arch Coal.

Services for Frazier were conducted March 29 at the Defeated Creek Old Regular Baptist Church. Burial followed in the Frazier Cemetary. 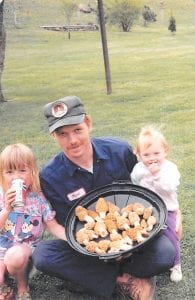 Photo above shows a younger Mark Allen Frazier after a successful hunt for Dry Land Fish. At right, Frazier is pictured inside the Huff Creek mine, where he worked for 14 years.

Frazier worked several years in coal mining, the last 14 of those at the Huff Creek mine. Fellow miners remember him as one of the Huff Creek’s best employees.

“He was one of the best men they had,” Adam Gibbons, who worked with Frazier for two years, wrote in a tribute. “I enjoyed being around him because he always wanted you to try his homemade bacon he made.”

Frazier was a loving father and husband who enjoyed deer hunting, fishing, four-wheeling, farming, and spending time at home with his children, including twin sons Mason Keith Frazier and Matthew Allen Frazier.

Frazier was a son of Beatrice Polly Frazier and the late Fred Frazier and was married to Jennifer Caudill Frazier. He was also the father of three daughters: Sasha Nicole Engle of Sandlick, Ashley Rowena Perkins of Linefork, and Katelyn Makayla Caudill of Linefork.