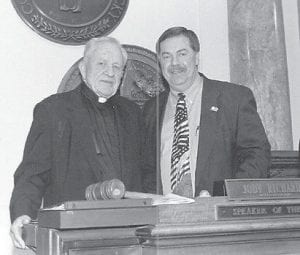 When Father Edward Randall retired last year at age 88 and returned to his native Massachusetts, a terrible void was left in Letcher County. He will be remembered not only for the more than a half century of service in the priesthood but also for the influence he had on dozens and perhaps hundreds of art students he left behind.

Typically, he would begin a new class each spring after Easter. Many new students, expecting to pick up a paint brush and start painting immediately, were disillusioned when they learned that they would be required to take months of classes in basics before ever wetting a brush.

His friendly, soft-spoken demeanor was captivating. The one-hour classes seemed to pass in 20 minutes as he worked with simple tools consisting of a chalkboard, chalk and eraser. Beginning with simple lines he demonstrated how to give objects a three-dimensional effect by using vanishing points and shadows. Each week his students were given assignments to keep them busy until the next lesson. When he critiqued his students’ work it was never demeaning; it was always inspiring.

By the end of summer his students were learning to dabble in oil paints and Father Randall helped each one select a simple landscape or seascape for their first venture. With gentle help from their mentor, students soon lost their fear and began to gain confidence by experimenting with various paints, thinners, brushes and other art supplies. Many beginner students stayed late and mingled with students in the advanced class who willingly shared their knowledge. Many students became close friends and continued going to classes for years to learn from each other and for the social aspect of their hobby.

Father Randall is not only recognized for his contribution to the art community, but also for the nearly two decades he traveled in the southern United States working in poor missions. In 1982, Mother Teresa expressed an interest in establishing a rural ministry in America. At Father Randall’s request she decided to locate her first rural ministry in Jenkins and sent four nuns to work with him. They established the Missionaries of Charity, the first in rural America, and have been helping to feed, clothe, shelter and care for poor mountain residents ever since. Part of the mission is to provide a shelter for abused women.

Mother Teresa made two visits to eastern Kentucky, in 1982 and again in 1986. She touched the lives of many people both times. Through the years, Father Randall developed a close friendship with Mother Teresa and accompanied her on several mission trips.

Father Randall was ordained in 1950 and celebrated the golden anniversary of his priesthood in 2000. Former State Representative Howard Cornett invited Father Randall to Frankfort to give the opening prayer for the House and then surprised him with a House Floor Citation in recognition of his extraordinary dedication and public service to the church and to the citizens of Letcher County.

Many of Father Randall’s former students will honor his memory by exhibiting their artwork at the Harry M. Caudill Memorial Library in Whitesburg through April 24 during normal library hours. For additional information, call Bessie Shepherd at 633- 9123, Doris Adams at 632- 3777 or Ked Sanders at 832- 4122.