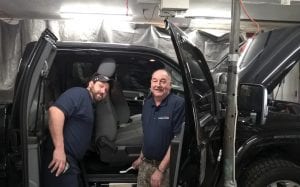 CLEANING UP – Justin Caudill (left) and his father, Curtis Caudill (right), of Little Cowan, have been cleaning cars and houses for the past three years, but now the two are branching out into a pick-up and delivery dry-cleaning service. (Photo by Sam Adams)

Curtis and Justin Caudill plan to clean up eastern Kentucky.

The father and son team has started a dry cleaning and laundry service that is more closely associated with big cities than rural Appalachia. Instead of customers coming to a storefront with their clothes, they’ll go to a web site, schedule pickups and the Caudills will go to them.

“He researched it, he found it on the web site, and we went to New York for training to learn about it,” Justin Caudill said.

The company the two formed is now a licensee of Oneclickcleaners.com, a Brooklyn, New York company that began franchising and licensing cleaning services in 2011. In 2014, the company had fewer than 25 affiliates across the U.S.

Customers will be able to go the company’s web site, put in their location and schedule a time for pick up.

Curtis and Justin will pick up their clothes, clean them, and return them to the owner, hopefully with a quicker turnaround than most cleaners currently have.

“The last one I know of that did that here was Pigman Cleaners,” Curtis Caudill said. “They had a little van they drove around.”

Pigman Brothers Dry Cleaners, which was located on what is now East Main Street in Whitesburg, closed in the 1980s.

Curtis said they currently have a three-day turnaround for clothes, which will likely increase as the business becomes more popular. While laundry pickup and delivery may be common in cities, it’s unusual in rural areas because of the distances involved. The Caudills, who live on Little Cowan, plan to offer their service throughout Letcher, Knott, Perry, Harlan and Pike counties.

The business builds on what the two are doing already with East Kentucky’s Best Cleaning Service. They began pressure washing houses, cleaning carpets and detailing cars after they moved back here three years ago from North Carolina.

Curtis Caudill, a native of Knott County, started selling pizza ovens in Letcher County for Hunt Brothers, and eventually advanced to be a regional manager in charge of the company’s operations in North Carolina, half of Virginia and half of West Virginia. He retired from the company after 30 years, and moved back to Little Cowan where his wife, the former Juanita Fields, grew up.

Their son Justin worked for Hunt Brothers for 14 years, and was a district manager and accounts manager until his region was shut down, and shortly after his house burned down.

“Mom and Dad were getting ready to move back and asked if I wanted to come with them, and I jumped at the chance,” he said.

Now they operate the cleaning service together out of Curtis’s garage, but plan to expand if the business takes off.

“We’re working on our second million,” Curtis joked. “We gave up on our first million.”