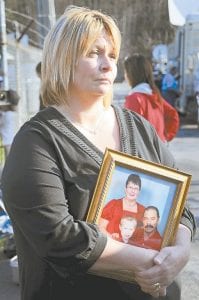 Michelle McKinney talked to the media on Tuesday outside of Marsh Fork Elementary in Naoma, W.Va., while holding a family photo of her father, Benny Willingham, mother, Edith Willingham, and grandson, McQuade Canada. Benny Willingham, 61, of Corinne, W.Va., was killed in Monday’s explosion at Massey Energy’s Upper Big Branch Coal Mine. (AP Photo)

For Timmy Davis Sr. and his family — like so many in the mountainous coalfields of West Virginia — descending into the mines was a way of life.

So when Davis Sr. went into the Upper Big Branch mine in Montcoal on Monday with his two nephews, Josh Napper and Cory Davis, it was just another day in the family business.

This time, they never came out.

An explosion shook the underground mine operated by an affiliate of Massey Energy Co. while Davis Sr. and his nephews were inside, killing 25 miners and leaving four others unaccounted for inside the mine.

Timmy Davis Jr. said Massey officials notified the family that his father and cousins were among the dead.

Davis Jr.’s brother, Cody Davis, also works as a miner and was on his way into the mine when the blast happened. Now, he is without his dad — his best friend. Cory Davis won’t be at any more family campouts in the mountains. Napper won’t see his infant daughter grow up.

Here is a look at others among those killed in the explosion.

“He was looking forward to riding them around on the tractor this summer,” Cline said. “He kept talking about that at Easter dinner.”

Even though he was about 6 feet tall, everyone called Acord “Pee Wee” — which he hated.

“That was his nickname since he was a little tyke. It just stuck,” Cline said.

Acord, 52, had worked in mines for 34 years and liked the work, Cline said. But he told his family on Sunday that he was concerned about the mine’s roof and worried about going to work Monday.

Jason Atkins was born and raised in Boone County, near the coal mine where he lost his life, said his father-in-law, Rick Withers.

The 25-year-old miner and his wife, Amanda, 28, met when they were students at West Virginia Tech and got married in 2008, Withers said. Amanda Atkins could not be reached for comment Tuesday.

Withers said he was not sure when Atkins began working at the mine.

“He was an hourly guy,” Withers said.

The state medical examiner’s office said Tuesday that Atkins was among the dead.

Cory Davis played baseball in high school and followed his family into the mines.

The 20-year-old from Dawes, W.Va., worked with his father, Tommy Davis, and cousin Timmy Davis Jr. at a surface mine, but all three were laid off in the past two years. And all three ended up at Massey.

Cory Davis loved the outdoors and would often spend his weekends at a family camp on a mountaintop.

“We’d just run around, build a fire, ride four-wheelers,” Timmy Davis Jr. said. “Our life was kind of boring. We’re kind of hill folks. We stay up on the mountain.”

Timmy Davis Sr. loved coal mining — and when he wasn’t doing that, he was out hunting and fishing.

“My dad was the best hunter and fisher you’ve ever seen. The biggest buck or bear would come to him so he could shoot them,” said Timmy Davis Jr. “He’s got five or six in here. He’s killed a lot of big deer.”

Davis Jr. said his uncle Tommy Davis and brother Cody Davis also were at the mine at the time and survived the blast.

Cody Davis and his father were best friends, Davis Jr. said. Cody Davis was in his way in at the time of the blast, said Davis Jr., who works as a coal truck driver.

“He loved to work underground,” the younger Davis said of his father, who was from Cabin Creek, W.Va. “He loved that place.”

Steve Harrah — known to his co-workers as “Smiley” — was “always thoughtful and would give you a hand,” his father-in-law said.

His sister, Betty Harrah, said other workers thought of her brother as a good boss.

“He wouldn’t ask them to do anything he wouldn’t get down in there and do,” she said.

“They went to the same high school, and they just knew each other and started dating,” said Bowden, who choked up as he spoke. “It’s pretty rough.”

Harrah was leaving the mine when the explosion happened. The mining company told the family that Harrah was killed instantly, Bowden said.

Josh Napper was a hulking man with a simple claim to fame: He could bench press more than 500 pounds.

“If there was any way he could, he could have moved half that mountain,” said Napper’s cousin, Timmy Davis Jr. “That’s about all he did was lift weights.”

The 25-year-old Napper came to work in the coal mines just two months ago after working in the health care industry in his hometown of Rutland, Ohio, Davis said.

“He made decent money in Ohio,” Davis said. “He just knew it was more money underground. He came here for the money.”

Napper lived in Giles, W.Va., with his grandparents and spent his days off with his infant daughter, Davis said.

Howard “Boone” Payne was a “gentle giant” in his early 50s with flaming red hair and broad shoulders.

“He would go out of his way to help someone,” said his brotherin law, Terry Wright of Roanoke, Va. “He loved to have fun. He was quiet and loved his family.”

Payne began working as a coal miner shortly after graduating high school in 1977. He had worked for Massey Energy for eight to 10 years. Massey told Payne’s wife, Debra, about his death at 2 a.m. Tuesday, Wright said.

Wright said Payne never expressed any fears about his profession. As a former coal miner, himself, Wright understands why.

Gary Quarles’ life was consumed by his wife and two children.

The 33-year-old from Naoma, W.Va., took trips every summer to Myrtle Beach, S.C., with the kids, ages 9 and 11, as well as his wife. The family often went fishing along the New River there.

“He liked to hunt and spend time with his kids,” Janice Quarles said. “That was about it. That’s all he did.”

He liked to hunt everything from raccoons and deer to wild boar, and he had wanted to stay home from work Monday because his children were still on Easter break, she said.

Janice Quarles said her husband was a quiet, laid-back man nicknamed “Spanky.” She was told of his death by a Massey official.

Gary Quarles started coal mining when he was 18. He was among those finishing a 10.5-hour shift when the explosion happened, his wife said.

Deward Scott met his wife, Crissie, when she was his karate student. The pair loved to go hunting together — Deward Scott taught her to bow hunt when they first met nearly 20 years ago, she said.

They’ve been together ever since — usually enjoying the outdoors while hiking, hunting, fishing or gardening. The 58-yearold Montcoal resident had been a miner for 21 years and loved his job. But he also was kind and outgoing, Crissie Scott said.

“He was a Christian man who loved to help people,” Crissie Scott said, her voice choking. “He’s one of those people that once you met him, you wouldn’t forget him.”

The company notified Crissie Scott that her husband was among the miners killed in Monday’s explosion.