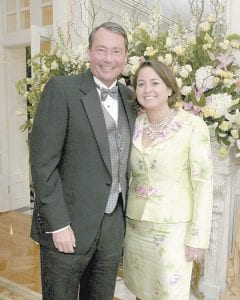 Former Kentucky lawmaker Steve Nunn was indicted on a capital murder charge this week, nearly two months after his arrest in the shooting death of his ex-fiancee.

Fayette Circuit Judge Kim Bunnell read the charges handed down by a Fayette County grand jury on Tuesday, which included one count of murder and one count of violating an emergency protective order. The order was obtained months before Amanda Ross was shot and killed Sept. 11 outside her Lexington home.

Nunn, the son of former Gov. Louie Nunn, did not attend. He remained held without bond on the murder charge.

His arraignment was set for Nov. 19. Nunn pleaded not guilty to the charges a week after his arrest.

His attorney, Warren Scoville, did not immediately return a message.

Commonwealth’s Attorney Ray Larson met with the grand jury Tuesday but declined to comment about the case. Larson hasn’t said if he will seek the death penalty.

Last week, Nunn was indicted in Hart County on wanton endangerment charges stemming from his arrest at a cemetery where he was accused of firing a gun near six police officers hours after Ross was killed. Police found the former lawmaker with self-inflicted cuts on his wrists.

Nunn was put on administrative leave in February and resigned in March from his job as deputy secretary of the Cabinet for Health and Family Services after he was charged with domestic violence against Ross, with whom he had lived for several months. Under the protective order obtained by Ross, Nunn also was prohibited from possessing firearms.