FDA says Zicam nasal spray can cause loss of smell 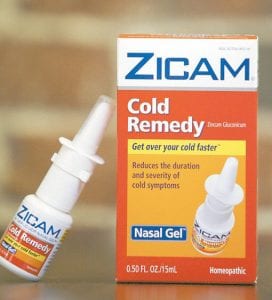 DANGER — Zicam Cold Remedy nasal gel is shown. The Food and Drug Administration this week said consumers should stop using the nasal gel and related products because they can permanently damage the sense of smell. (AP Photo)

The over-the-counter products contain zinc, an ingredient scientists say may damage nerves in the nose needed for smell. The other products affected by the Food and Drug Administration’s announcement are adult and kid-size Zicam Cold Remedy Nasal Swabs.

The FDA says about 130 consumers have reported a loss of smell after using Matrixx Initiatives’ Zicam products since 1999. Shares of the Scottsdale, Ariz.- based company plunged to a 52- week low after the FDA announcement, losing more than half their value.

“Loss of the sense of smell is potentially life threatening and may be permanent,” said Dr. Charles Lee, of FDA’s compliance division. “People without the sense of smell may not be able to detect dangerous life situations, such as gas leaks or something burning in the house.”

Matrixx defended the safety of its products, but said it may remove them from the market.

The FDA said Zicam Cold Remedy was never formally approved because it is part of a small group of remedies that are not required to undergo federal review before launching. Known as homeopathic products, the formulations often contain herbs, minerals and flowers.

A warning letter issued to Matrixx on Tuesday asked the company to stop marketing its zinc-based products, but the agency did not issue a formal recall. Instead, regulators said Matrixx would have to submit safety and effectiveness data on the drug.

“The next step, if they wish to continue marketing Zicam intranasal zinc products, is for them to come in and seek FDA approval,” said Deborah Autor, director of FDA’s drug compliance division.

The agency is requiring formal approval now because of the product’s safety issues, she added.

“It won’t bring my smell back, but at least I feel like there’s some justice that’s starting to take place,” said David Richardson, of Greensboro, N.C., who lost his sense of smell after taking Zicam for a cold in 2005. He said he hopes the product will be formally banned.

Medical records appear to support Richardson’s claim that his lost sense of smell was linked to using Zicam.

The global market for homeopathic drugs is about $200 million per year, according to the American Association of Homeopathic Pharmacists. The group’s members include companies like Nutraceutical International Corp. and Natural Health Supply.

Matrixx has settled hundreds of lawsuits connected with Zicam in recent years, but says on its Web site: “No plaintiff has ever won a court case, because there is no known causal link between the use of Zicam Cold Remedy nasal gel and impairment of smell.”

The company said in a statement Tuesday that the safety of Zicam Cold Remedy is “supported by the cumulative science and has been confirmed by a multidisciplinary panel of scientists.”

But government scientists say they are unaware of any data supporting Zicam’s labeling, which claims the drug reduces cold symptoms, including “sore throat, stuffy nose, sneezing, coughing and congestion.”

Matrixx said it will consider withdrawing the products, which accounted for about 40 percent of its $111.6 million in sales last year.

Health officials said they have asked Matrixx executives to turn over more than 800 consumer complaints concerning lost smell that the company has on file. A 2007 law began requiring manufacturers to report such problems, but FDA regulators declined to say Tuesday whether the company broke the law.

The 130 reports received by the FDA came entirely from physicians and patients, not the manufacturer.

“FDA doesn’t take action against drug products without evaluating all of the circumstances surrounding the issues with the product,” Lee said.