Fear of violence grows in fight over mining 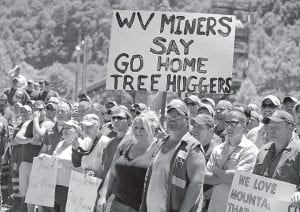 Massey Energy miners protested in Sundial, W.Va., in June. Tension has been building for months as activists mount sometimes brazen acts of civil disobedience to stop mountaintop removal mining as it gains closer scrutiny from regulators, policy makers and the public. (AP Photo)

It was the slap heard ‘round the coalfields: Cordelia Ruth Tucker, wearing the fluorescent-striped shirt of a miner, strode past West Virginia state troopers and into a stream of marchers protesting mountaintop removal mining to deliver an audible smack.

The 54-year-old Rock Creek woman isn’t talking as she awaits trial on a battery charge. Her neighbor, environmental activist Judy Bonds, says she was on the receiving end of the slap.

And Bonds — like many in a place where labor disputes have a violent history — fears more blows will follow as the fight escalates over mountaintop removal, the uniquely Appalachian form of strip mining that involves blowing tops off mountains and dumping the rubble in valleys.

For nearly a decade, environmentalists and the mining industry battled in courtrooms and the Capitol. Arrests were unheard of.

This year, as mountaintop removal has drawn more scrutiny from regulators, policy makers and the public, the activists’ strategy changed.

There have been nearly 100 arrests in 20 protests, most involving trespassing. Led by a new group called Climate Ground Zero, the activists have chained themselves to giant dump trucks, scaled 80- foot trees to stop blasting and paddled into a 9 million-gallon sludge pond. They’ve blocked roads, hung banners and staged sit-ins.

Virginia-based Massey Energy claims a single 3-1/2-hour occupation at Progress Coal Co. in Twilight cost the company $300,000. Two environmentalists pleaded no contest to battery after that incident for trying to push past a miner and climb a 20-story, earthmoving crane.

Mountaintop removal foes say the industry and its allies are stoking fear and anger among miners and their friends by accusing environmentalists, Congress and the Obama administration of trying to kill coal through regulation and permitting.

Massey equates anti-coal with anti-American. Pittsburgh-based Consol Energy blames the planned layoffs of 482 miners on a lawsuit by the Ohio Valley Environmental Coalition.

Both sides are fighting for a way of life. The miners see the mountains as their livelihood. The environmentalists see them as divine and irreplaceable creations.

Since that slap in June, conflict has manifested itself mainly in harsh words and shows of force: Shout-downs by hundreds of miners at an Army Corps of Engineers hearing; a bare-bellied miner’s profane, throat-slitting gesture at a picnic for environmentalists on Kayford Mountain; a curse-laden online tirade in which someone using the screen name “Superhippieslayer” warns, “Look out violence is coming your way. There is a group ready as we speak to eliminate the threat.”

The bitter feelings bubble up in comments posted on YouTube video links to incidents like the June 23 protest march where Bonds was slapped. Hundreds of comments were posted after she spoke at a Dec. 7 rally in Charleston, many laced with profanities.

It’s to the point where Bonds, a diminutive 57-year-old, has installed home-security cameras, carries a handgun and checks her car for dangling bomb wires.

“I feel a sense of dread,” she said. “You’re taking your life in your hands if they know who you are.”

Lorelei Scarbro, an activist with Coal River Mountain Watch, said the industry provokes the miners as it demonizes the environmentalists.

Environmentalists use words like “corrupt,” ‘’greedy” and “thugs” to describe the pro-coal establishment. Industry counters with words like “hippies,” ‘’extremists” and “terrorists.”

The West Virginia Coal Association dismisses much of the inflammatory language as harmless rhetoric, to be expected when jobs are on the line.

“We absolutely don’t condone people who use threats, intimidation and general thuggism,” said senior vice president Chris Hamilton. However, “from our standpoint, it’s more difficult to engage in constructive discussion with someone who has as their primary objective to shut the industry down.”

Neither side is backing down.

“People are not going to just roll over and let their livelihood be regulated out of business,” said Beckley coal truck supplier Carl Hubbard, who bemoaned “limpwristed greeniacs” in a recent newspaper column. “God put that coal here for us to mine, in my view.”

There have been pleas to tone things down.

In July, after the South Charleston Museum board of directors canceled the premiere of the film “Coal Country” over unspecified security concerns, the West Virginia Council of Churches begged both sides to respect the rights of lawful assembly and free speech.

Months later, executive director Dennis Sparks is still waiting: “There’s not a day goes by that we don’t lift it up in prayer.”

Politicians and power brokers have generally responded by inciting or standing indifferent. Take state Senate Majority Leader Truman Chafin: “The Lord didn’t create many things without a purpose. But mosquitoes and the EPA come close, I think.”

“The most important factor in maintaining coal-related jobs is demand for coal,” he said. “Scapegoating and stoking fear among workers over the permitting process is counterproductive.”

Elsewhere, rhetoric might be dismissed as just that, but the coalfields have a bloody history.

In 1920, a shootout between unionizing miners and coal company security guards left 12 men dead on the streets of Matewan, West Virginia. The 1921 Battle of Blair Mountain, an armed union uprising, eventually required the intervention of federal troops. During a union strike in the 1980s, car windows were smashed and shots were fired.

“But this is different,” said William Kovarik, an associate professor at Radford University in Virginia who studies and teaches the history of environmental movements worldwide.

Now the conflict is between miners and people within their own communities.

“Union and nonunion workers are being told by management that their livelihoods are at great risk from out-of-state environmentalists,” Kovarik said. “Management is going out of its way to equate them with terrorists, when in reality, they are their own neighbors, grandparents, retired coal miners and college students.”

And dehumanizing your opponent, Kovarik said, can open the door to real violence.

Activist Chuck Nelson, a former underground miner from Glen Daniel, said the longer surface miners face uncertainty, the more the danger grows: The federal government must act soon, one way or the other.

And if the EPA comes down on the environmentalists’ side?

“Well,” Nelson said, “there’s a possibility it might not be safe to live in the Coal River Valley.”