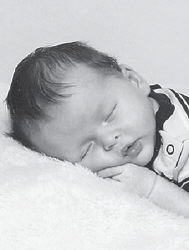 Bryson Brannen Scott Dingus, the son of Natasha Wright and Brandon Dingus, was born Feb. 21 at Lonesome Pine Regional Hospital. His grandparents are Keith and Lisa Wright of Jenkins, Sherry and Ben Morgan of Pound, Va., and Terry Dingus of Norton, Va. His great-grandparents are Creed Newsome of Jenkins and the late Hazel Newsome; Millie Wright of Jenkins and the late Bennie Wright; Larry and Betty Rhienbolt of Kingsport, Tenn.; Vernie and Betty Stewart of Dorton; and Charles and Helen Mullins of Pound, Va.