February was short but weather sure was rough 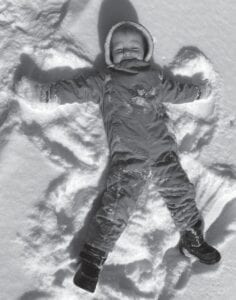 Colden Persh makes a snow angel. He is the grandson of Denver Whitaker, Kingscreek, and Janey Calihan of Ohio.

I hope you are recovering from ice, snow and anything else that has come your way. The Ohio Valley area has been blessed with a couple of semi-warm days.

There were temperatures of 50 degrees with sort of chilly wind that made it not as good as a spring or summer day.

Early last Wednesday morning I had something I had to take care of as my son came in the kitchen to fix coffee. I know Keith doesn’t like to talk of the morning, as he sure isn’t a morning person.

I had to tease as the weather on television was saying how nice outside. So I had no reason to pull the blinds to check out back where I was parked.

Jokingly I asked if he was going to clear the frost off my car. He replied, “Yes I was planning to!”

I replied, “I am just joking there should not be any frost.” Was I in for a surprise as I looked outback? Every vehicle was covered with a thick frost.

I told Keith I could do that so he wouldn’t have to get dressed, as I was already to go outside except for slipping my coat and shoes on. 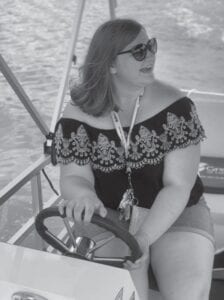 Jessie Nottingham is a freshman at Northern Kentucky University, and plans to be a music and Spanish teacher.

While I was folding a bit of laundry, Keith picked up my car keys and had my car cleaned off and pulled around front for me. As I ventured on my way, again I was surprised as there was a bit of ice along the side of the road.

It is difficult to realize it is March 1. During my childhood Mommy would say that if March came in like a lamb it would go out like a lion.

February is a short month, and it sure has been a rough one with weather. At least we didn’t have the snow that Texas and other states suffered through.

It was so sad and disturbing hearing of people freezing to death in the confinements of their home, both young and old.

How many have gotten your COVID vaccine? I am sort of skeptical, and on the other hand I am in the category that is in danger of getting the coronavirus with my health issues. I’ve lived with shortness of breath over ten years, getting the five-way bypass didn’t solve the problem. I have trouble breathing as I have nodules scattered throughout my lungs. Occasionally I have a dry cough, and I get upper respiratory infection which leaves me very sick. 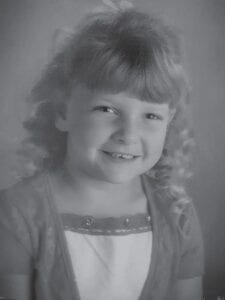 Considering what I have gone through in the last eight years, I thank God I still am able to do the things I do. So many others are lots worse than me.

Johnny and Ann Calihan are the most amazing people that I have ever known. Sunday evening I had the utmost pleasure to spend a few hours with Johnny and Ann while observing how far Johnny has come with the Grace of God. Just being able to do a simple thing as reach for the remote control to turn the television on is a small miracle in itself, and to see him able to reach for a glass of water to get himself a drink, not spilling a drop.

Yes, once again thank God for His blessing on these two wonderful people. Hospice has released Johnny. Just please keep the prayers going as well as saying thank you prayers

Ann had a short bout with sudden illness, but she is almost back to her usual self. Ann has gotten high-tech way ahead of me. Some time ago one of her daughters had gotten an Instapot, which Ann caught on fast of how to use.

On her kitchen counters she has an Air Fryer, plus a small Hamilton Beach blender. I plan to copy Ann, to get a small blender. Now I am not brave enough to try an Air Fryer.

I enjoyed having the pleasure to be with both, I am looking forward to be able to do it again.

Johnny and Ann’s daughter Sue Wagner is having trouble with her stomach, she has developed gastropareses, the same as what I have.

Sue celebrated her first year since her liver transplant. The doctor gave her wonderful news as the liver is doing what it is supposed to.

Johnny and Ann’s daughter Carol Dieckman had an emergency visit to the hospital and had a stent put in her heart. Carol is on dialysis, and is home now, so keep the entire family in your prayers.

If anyone has any information about Stevie Ray “Bo” Gibson, please call John Secor, 860-485-0295. It is very important to gather as much information as possible, to share what Bo was like as a young boy growing up in the mountains of Roxana.

The tribute to Stevie Ray will be the first of April, in Connecticut. I wish I was able I would be there. Stevie Ray Gibson gave his life to protect our freedom. He lost his life at such an early age, dying a hero receiving a Bronze Star for Heroism protecting his military comrades from enemy fire, and our country.

Stevie Ray Gibson was the son of Johnny and Leona Hollins Gibson, grandson of Harlan and Sarah Adams Hollins, Roxana.

My daughter Kay Gray has sure enjoyed her stay at their home in Destin, Florida as they missed all the snow in the Ohio Valley area.

If I could adopt an adult daughter who is a grandmother I would gladly sign the adoption papers. Simply because she left me behind.

On a serious note, I really wouldn’t change living where I do for anything, as long as I don’t have to travel in the snow. There’s nothing more beautiful than a fresh fallen snow, or being able to sit in the confinements of my warm home, watching it snow.

My son Keith Ballard sure got a little worn out shoveling snow, especially when it was mixed with a heavy layer of ice.

Now we are expecting flooding in the Ohio Valley area. It isn’t going to be long until I sow lettuce in a glass-covered wheelbarrow.

Hello to Mike and Marcia Caudill. I sure wish Carcassonne was going to open along with Campbells Branch Community Center.

Hello Les and Pat Wagner. I still haven’t got around calling to check on you.

I am sorry I have to cut this column short. My sugar is dropping and I can’t concentrate. Until next time