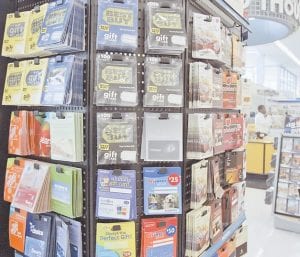 Gift cards for various retailers are off ered for sale at a supermarket in Omaha, Neb. The Federal Reserve issued new rules this week to protect Americans from getting stung by unexpected fees or restrictions on gift cards.(AP Photo)

The Federal Reserve issued new rules on Tuesday to protect Americans from getting stung by unexpected fees or restrictions on gift cards.

Gift cards have grown in popularity — with more than 95 percent of Americans having received or purchased them, the Fed said.

And as usage has gone up, so too have complaints from people taken by surprise by fees that eat into the value of the cards as well restrictions on how long they’ll be good for.

Under the rules, consumers must have at least five years to use the gift cards before they expire. The Fed also says service or inactivity fees can be imposed only under certain conditions.

Such fees can be charged if the consumer hasn’t used the card for at least a year, if the consumer is given clear disclosures about them and no more than one fee is charged a month.

Congress ordered the Fed to issue the new protections under a law enacted last year.

The Fed received more than 230 letters weighing in on its proposal first unveiled in November.

Many individual consumers urged the Fed to ban all fees and to eliminate expiration dates so that people didn’t lose any value on the cards.