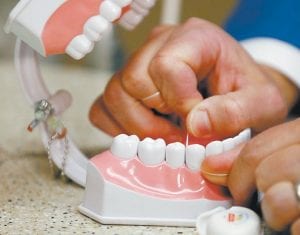 Flossing might help you have better oral health. But there’s no proof of it, despite decades of recommendations by dental experts, the federal government and, yes, manufacturers of floss.

Federal advice is supposed to be based on scientific evidence, so Jeff Donn of The Associated Press asked federal agencies for the evidence. They didn’t reply immediately, but when they issued their latest dietary guidelines this year, “the flossing recommendation had been removed, without notice,” Donn reports. “In a letter to the AP, the government acknowledged the effectiveness of flossing had never been researched, as required.”

Donn examined “the most rigorous research conducted over the past decade, focusing on 25 studies that generally compared the use of a toothbrush with the combination of toothbrushes and floss,” he writes. “The evidence for flossing is ‘weak, very unreliable,’ of ‘very low’ quality, and carries ‘a moderate to large potential for bias.’”

Flossing is often cited as a way to remove plaque, but “The majority of available studies fail to demonstrate that flossing is generally effective in plaque removal,” said a review conducted last year. “One study review in 2011 did credit floss with a slight reduction in gum inflammation — which can sometimes develop over time into full-fledged gum disease,” Donn reports. “However, the reviewers ranked the evidence as ‘very unreliable.’ A commentary in a dental magazine stated that any benefit would be so minute it might not be noticed by users.”

Wayne Aldredge, president of the American Acad- emy of Periodontology, “acknowledged the weak scientific evidence and the brief duration of many studies,” Donn writes. “In an interview at his private practice in New Jersey, he said that the impact of floss might be clearer if researchers focused on patients at the highest risk of gum disease, such as diabetics and smokers. Still, he urges his patients to floss to help avoid gum disease.” He told Donn, “It’s like building a house and not painting two sides of it. Ultimately those two sides are going to rot away quicker.”

“Aldredge also said many people use floss incorrectly, moving it in a sawing motion instead of up and down the sides of the teeth,” Donn reports. “Floss can occasionally cause harm. Careless flossing can damage gums, teeth and dental work. Though frequency is unclear, floss can dislodge bad bacteria that invade the bloodstream and cause dangerous infections, especially in people with weak immunity, according to the medical literature.”

But Tim Iafolla, a dentist with the National Institutes of Health, told Donn that Americans should still floss: “It’s low risk, low cost. We know there’s a possibility that it works, so we feel comfortable telling people to go ahead and do it.” a source of vitamin A, magnesium and potassium, contains no cholesterol and is very low in sodium. This rich red fruit is fat-free and also has lots of lycopene, an antioxidant believed to reduce cancer and lower the risk of heart attack. Though there is sugar in the melons, it is naturally diluted by the high levels of water they contain.

Watermelon varieties are larger, fleshier and sweeter, the seeds smaller and the rind thinner. Watermelon is perhaps the most refreshing, thirst-quenching fruit of all. It’s a perfect snack to serve on hot and humid summer days when we need to restore our body with plenty of fluids.

Fresh watermelon may be eaten in many ways — the most common being plain or with a pinch of salt. Using watermelon in savory dishes also is becoming popular. When using watermelon in your recipes, think outside the rind. Here are a few suggestions for ways that you can incorporate watermelon into a variety of dishes:

• Watermelon is ideal for chutneys, glazes, jellies, jams and reductions.

• Because it’s easy to puree, watermelon can be used in a variety of sweet and savory sauces.

Place the chicken in a
large zipper-lock bag with
the pineapple juice, soy
sauce, ginger, garlic and
green onions and seal tightly. Place bag on a pan or in
a bowl, and marinate in the
refrigerator at least 2 hours
or up to 12 hours. Meanwhile, make the watermelon
glaze.

Combine all 8 ingredients. Simmer together in a
heavy saucepan for 20 minutes or until sauce thickens.
Reserve 1/2 cup of the sauce
for dipping. Set the remaining sauce aside to glaze the
wings.

1. Heat the oven to 450
F. Pour the oil evenly on 2
rimmed baking pans. Divide
wings evenly between the
pans. Toss wings with the
oil. Season wings with the
poultry seasoning, salt and
pepper; toss to coat. Leave
ample room between the
chicken pieces.
2. Bake for 25 minutes,
then turn wings over and rotate the position of the pans.
Continue to bake another
25 minutes until chicken
pieces are crisp and golden
brown.
3. Toss chicken with the
reserved watermelon glaze
until coated, and then return all of the pieces to one
of the pans and continue
to bake until glazed and
charred in places, about 5
minutes. Serve with some
of the reserved watermelon
glaze.
Angela Shelf Medearis
is an award-winning children’s author, culinary historian and the author of
seven cookbooks. Her new
cookbook is “The Kitchen
Diva’s Diabetic Cookbook.”