By KATE BRUMBACK
The Associated Press 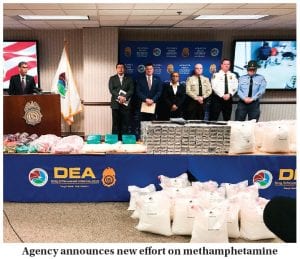 U.S. Drug Enforcement Administration Acting Administrator Uttam Dhillon announced the launch of Operation Crystal Shield at a news conference in Atlanta last week. Federal authorities say they are targeting methamphetamine “transportation hubs” around the country in an effort to block the distribution of the highly addictive drug. (AP Photo)

Federal authorities are targeting methamphetamine “transportation hubs” around the country in an effort to block the distribution of the highly addictive drug, officials say.

U.S. Drug Enforcement Administration Acting Administrator Uttam Dhillon visited Atlanta late last week to announce the launch of Operation Crystal Shield. Atlanta is one of eight cities the agency has identified as a hub where methamphetamine from Mexico arrives in bulk for distribution around the country.

The other cities are Dallas, El Paso, Houston, Los Angeles, New Orleans, Phoenix and St. Louis. By focusing on those hubs, Dhillon said, they hope to attack the entire supply chain and intercept the drug before it is trafficked to neighborhoods and communities throughout the country.

While much of the focus in recent years has been on synthetic opioids like fentanyl, methamphetamine continues to be a leading cause of death and addiction, Dhillon said.

A 2005 federal law that regulated the retail sale of over the counter drugs like pseudoephedrine — which can be used to make methamphetamine — largely eliminated the production of the drug in the U.S., Dhillon said. Now, however, almost all the methamphetamine consumed in the U.S. comes from Mexico, where it’s produced on an industrial scale and smuggled across the border, he said.

Authorities have seen a dramatic spike in the amount of methamphetamine smuggled across the U.S.-Mexico border in recent months.

From October through the end of January, authorities seized about 50,000 pounds of methamphetamine at U.S.-Mexico border crossings.That’s more than was seized for the entire 2017 fiscal year. December was an especially busy month for methamphetamine trafficking, with more than 16,000 pounds of the drug seized at border crossings, which is nearly as much as was confiscated in all of 2014.

Dhillon and other law enforcement officers spoke at a news conference with piles of methamphetamine from two recent seizures in the Atlanta area laid out in front of them.

Firefighters responding to an apartment fire in Cobb County found a meth lab. Inside, authorities found boxes of candles that contained methamphetamine and could be cooked down and processed into crystal meth, said DEA Special Agent in Charge Robert Murphy, who runs the agency’s Atlantafield office.The candles had stickers indicating they’d been inspected by authorities at the border, but the drugs went undetected, he said.

Also on display were transparent evidence bags containing about 1,300 pounds of processed crystal meth that were seized in a Clayton County home along with about 100 gallons of a product that could be cooked into about 5 to 7 pounds of crystal meth per gallon, Murphy said. The drugs on display represented about 2.3 million individual doses, he said.

“This is a staggering amount of methamphetamine, and it illustrates the problem that we have,” he said.

Murphy said the production of the drug in Mexico results in a scary combination: a drug with higher purity and a lower cost.

The surge in resources associated with Operation Crystal Shield is expected to last at least through the end of the year, and authorities said they will be watching to see how the cartels pivot in response.

Three of the cities in the initiative are in Texas, partly because drugs shipped over its border can be difficult to intercept in the state’s vast size.

Special Agent Eduardo Chávez, who leads the DEA’s Dallas office, said the additional funding will help cover investigative expenses, including travel costs, and the focus on transit centers will catch traffickers in places they might think are lower risk.

At the crossroads of several major highways, Dallas is a natural hub for legitimate and illicit commerce.

It’s “far enough away from the U.S.-Mexico border that perhaps there’s a false sense of security,” Chávez said. “But thankfully we recognize that too.”