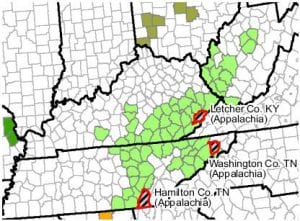 This map shows in green the counties which belong to the Appalachia High Intensity Drug Trafficking Area. The newest counties selected to join are outlined in red.

Letcher County has been designated as a member of the Appalachia High Intensity Drug Trafficking Area (HIDTA) – a move that should help local law enforcement agencies to secure more federal funding for the efforts to disrupt and dismantle drug trafficking organizations.

John P. Walters, director of the Office of National Drug Control Policy, announced the designation of Letcher and 25 other counties as part of the HIDTA program on Feb. 20. The program facilitates coordination and cooperation in drug control efforts among federal, state, and local law enforcement agencies in an effort to reduce drug trafficking and use throughout the United States.

According to Walters, Letcher and the other newly designated HIDTA counties have demonstrated that:

• their location is a significant center of illegal drug production, manufacturing, importation, or distribution.

• state and local law enforcement agencies have committed resources to respond to the drug trafficking problem, thereby indicating a determination to respond aggressively to the problem.

• drug-related activities in the area are having a significant harmful impact in the area, and in other areas of the country.

• a significant increase in allocation of federal resources is necessary to respond adequately to drug-related activities in the area.

As participants in the HIDTA program, the counties will be eligible to receive additional financial resources, as well as equipment and technology. The other 25 new HIDTA counties announced last week are located in Arkansas, California, Georgia, Illinois, North Carolina, Pennsylvania, Tennessee, and Texas.

“The designation of new counties into the HIDTA program will help leverage the important work already being done at the state and local levels,” said Walters. “The law enforcement professionals working on the streets of our communities understand the unique drug threats faced by their regions, and they are best positioned to develop solutions that eliminate the harms caused by the illegal drug trade. The collaborative approach of the HIDTA program creates a system of shared intelligence and resources, and helps disrupt and dismantle criminal drug trafficking organizations operating in the United States and abroad.”

The HIDTA program designates regions which exhibit serious drug trafficking problems and harmfully impact other areas of the country. The HIDTA program provides additional federal resources to those areas to help eliminate or reduce drug trafficking and its harmful consequences. Law enforcement organizations within HIDTA areas assess drug trafficking problems and design specific initiatives and strategies to reduce or eliminate the production, manufacture, transportation, distribution and chronic use of illegal drugs and money laundering.

There are 28 regions throughout the country designated as HIDTAs. HIDTA counties compromise approximately 14 percent of U.S counties, and are present in 45 states, Puerto Rico, the U.S. Virgin Islands, and the District of Columbia.