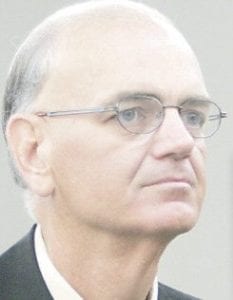 In the photo above left, Bill Nighbert, then Acting Transportation Secretary, appeared before a judge in Franklin District Court on charges of violating state personnel laws in July 2005. At right, road builder Leonard Lawson attended a celebration and ribbon cutting ceremony in April 2005 on Pine Mountain near Whitesburg. (AP Photos)

Federal investigators are looking into whether there’s a link between a leading Kentucky road contractor and a Pikeville company that made a $36,050 payment to former Transportation Cabinet Secretary Bill Nighbert, a newspaper reported earlier this week, citing an affidavit.

According to the affidavit by FBI Special Agent T. Clay Mason, Utility Management Group, known as UMG, made the payment to a Nighbert business early this year, The Courier-Journal of Louisville reported.

The newspaper previously reported that according to the affidavit, Nighbert or road contractor Leonard Lawson directed former state engineer James Rummage to obtain confidential cabinet cost estimates for road contracts in 2006 and 2007. Such estimates are supposed to be secret until sealed bids for the contracts are opened.

“Investigators believe UMG is the conduit for Lawson to reward Nighbert for his assistance while serving as KTC Secretary,” Mason stated in the affidavit, obtained Aug. 8 from the U.S. District Court clerk’s office in London, Ky. 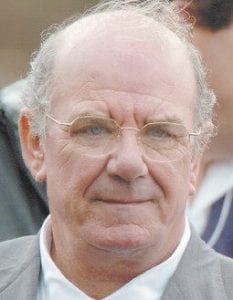 Attorneys for Nighbert and Lawson have said their clients did nothing wrong. Assistant U.S. Attorney Ken Taylor has decined to comment.

Lawson’s attorney, Larry Mackey of Indianapolis, declined comment when asked if his client had any ties to UMG.

The affidavit, dated Aug. 1, was given to obtain court approval of search warrants for UMG and a Corbin accounting firm, Marr, Miller & Myers. The accounting firm’s president, Archie Marr, is chief executive officer of UMG.

Federal agents seized documents and computers from UMG, which manages the Mountain Water District in Pike County, and the accounting firm during a search on Aug. 4.

The affidavit says “business records, correspondence and documentation … may reveal that Leonard Lawson is the true owner or otherwise has control of UMG.”

Lawson, of Lexington, has been a major road contractor and political contributor in Kentucky for more than two decades.

The cabinet’s confidential cost estimates are made so it can know when bids for road contracts are unreasonably high. For decades the cabinet has tried to follow an unwritten policy of rejecting and rebidding contracts if only one bid is received and it is more than 7 percent over the estimated cost.

Knowing the cost estimate in advance could be valuable to a contractor facing no competing bid because he could bid at least 7 percent over the estimated cost and still be confident of winning the contract.

The affidavit says “on some occasions Rummage delivered the engineer’s estimates to Nighbert, but on others he gave them directly to Lawson. On four of these times, Lawson gave Rummage $5,000 cash, for a total of $20,000.”

According to the affidavit, the value of contracts won by Lawson-affiliated companies for which he had the engineer’s estimates during 2006-07 was nearly $130 million.

Current Transportation Cabinet officials confirmed in April that the FBI had been reviewing records and interviewing employees in an investigation related to matters that took place during the 2003-07 administration of Gov. Ernie Fletcher.

A federal grand jury has heard witnesses in the case, but no one has been charged.

Rummage, who retired March 31, is cooperating with investigators, his attorney said.

The affidavit says, “Given that Lawson paid Rummage for information that Nighbert directed Rummage to obtain and give to Lawson, investigators believe that Lawson and Nighbert had some arrangement whereby Nighbert would be compensated when he left state government.”

Nighbert went to work in January as a member of the staff for the Senate Republican caucus. He stepped down from that job in July.

But the affidavit revealed that Nighbert also got a job with UMG after his tenure as transportation secretary ended last Dec. 10 when Gov. Steve Beshear took office.

The affidavit states that a subpoena of bank records revealed that on Jan. 7 a check for $36,050 from UMG and payable to a company called “Two Bucks LLC” was deposited in Nighbert’s personal account.

The affidavit stated that Marr, UMG’s chief executive officer, said Nighbert was “retained to perform consulting” and that “through his political connections, could assist in developing additional business.”

According to the affidavit, Marr said the $36,050 check was “an advance for Nighbert to purchase (a) car because the company did not want to purchase the car for liability reasons.”

The affidavit stated that “Marr admitted that Nighbert had done no work for UMG.”

Nighbert’s attorney, Howard Mann, said in a statement to The Courier-Journal, “It is simply not true that Mr. Nighbert performed no work” for UMG.