Feeling free with Circa Survive 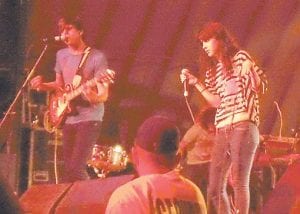 Sleeper Agent, whose guitarist Tony Smith and vocalist Alex Kandel are shown, were on the bill in Louisville with Circa Survive.

Located in a dome-shaped building connected to the end of a flea market in the back streets of Louisville, it is easy to see why Expo 5 is one of the most unique concert venues in the country. This venue is not only known for its peculiar setting, it is also noted for having top-of-the-line acts. October 16 was no exception when the venue hosted three acclaimed acts in the alternative music scene — Sleeper Agent (which has previously played in Whitesburg), Maps and Atlases, and the headliner, Circa Survive.

Before the three bands took the stage, Expo 5 hosted a local band at a bar located on the side of the building. The band, Foxery, played for 15 minutes before the show started. Though the band had an average singer, it was impossible not to let your eyes wander to the back of the stage where two drummers were pounding their instruments in synchronized harmony. While playing, Foxery started out with a small crowd but by the end of short set the outstanding sound of the percussion had pulled people in and the small bar was full.

Circa Survive’s Anthony Green was showered with confetti while his band performed at Expo 5.

The crowd soon flowed from the bar back into the main stage area and it wasn’t long before Bowling Green, Kentucky natives Sleeper Agent were on stage. Sleeper Agent opened for Company of Thieves at Summit City recently, but this was their first show opening for this tour. Sleeper Agent, which has been named a band to watch by Rolling Stone magazine, played a few songs, including the highly publicized hit “Get it Daddy,” before mentioning that lead singer Alex Kandel was celebrating her 19th birthday that night back in their home state.

The next band to take the stage was Maps and Atlases of Chicago. Known for their indie folk sound, the band played a beautifully understated low key set which let the music speak for itself. This not only excited the audience but also the lead singer of Circa Survive, Anthony Green, who joined the band for the final song.

After Maps and Atlases left the stage, the crowd grew silent as they watched crew members set up for the final band of the night, Circa Survive of Philadelphia. Not long after the lights dimmed and turned a deep shade of red, Anthony Green and fellow Circa Survive members were onstage belting out their first song of the set, “Get Out” from their third album Blue Sky Noise, which is on the Atlantic Records label. The crowd immediately broke out into frenzy and began to shout along with Green as he was singing. After the song was over Green thanked the crowd for being there and invited them to be themselves for the evening by saying, “One of these days society will yell and shout until they have forced you to be average, of the norm, and most of all not yourselves, but tonight I want everyone in this strange little venue to be as weird as they want to be because no one will look at you disapprovingly and tell you to act normal, whatever that’s supposed to mean.”

After these words were said, the band started to play as if they were agreeing and obeying to what Green had said, and the audience began to let loose and be their weird selves. Many of the audience members began to jump and scream while several began to crowd surf. Performing their high energy set, the group sang songs like “Glass Arrows,” “Sleep Underground,” and “ Lazarus” while confetti cannons were shot off several times, giving the crowd giant confetti-filled black balloons that where fallowed by white ones as the show progressed. Meanwhile, the crowd was still jumping, screaming, and crowd surfing.

When it was time for the band to sing their latest hit “I Felt Free” crowd members grew silent, because they knew inevitably they were about to hear the final song of the night, meaning they would have to leave and go back to their average lives, hearing society tell them to behave and to “act normal.” So for the last song, members of the audience let every ounce of strangeness they had out as Green began to sing the song’s chorus, “I felt free to do what I want because of the things you told me, because of the things you told me, you told me, I felt free.” By this time the crowd had truly began to understand what it meant to “feel free” even if it was just for one night — but a night they will never forget.

This was the night where weird was the norm and where the venue was as unique and strange as the audience that filled it.