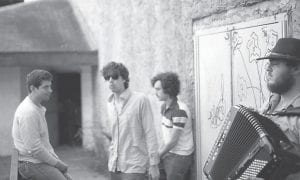 IN CONCERT FRIDAY — The Felice Brothers will be in Whitesburg Friday night to perform at Summit City. The band will tour next month in much larger venues with the Old Crow Medicine Show and others.

The writers at Rolling Stone

magazine now know what many local music fans have known since the Felice Brothers made their first visit to Letcher County some 16 months ago: They are one fine band.

“So we’re a little late to the party — the record came out in April — but we’ve seriously been digging Yonder is the Clock, the newest effort from mountain boys the Felice Brothers,” writer Austin

If you’re also a little late to the party and missed the Felice Brothers’ March 2008 performance in Whitesburg, you’ll be given a chance to catch up when the band returns to Summit City this Friday (July 17). Admission is $10, with opening act Folk Soul Revival scheduled to take the stage at 8 p.m. 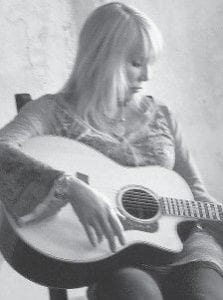 Carolann Ames of San Diego will peform at Summit City on Thursday, July 16. Critics say she has been ‘touched by angels.’

The Felice Brothers band was founded in 2006. Members are brothers Ian (vocals and guitar), Simon (percussion, vocals) and James Felice (accordion, piano, vocals) and longtime family friends Greg Farley (fiddle) and Christmas Clapton (bass). The band hails from Palenville, N.Y., a small town in the Catskill Mountains where, as the band’s publicist says, “a homegrown sound has been working its way through the bloodlines for generations.”

Palenville is located about 20 minutes from Woodstock, N.Y., the famous music and arts town which is lent its name to the famous 1969 rock festival held in nearby Bethel, N.Y. Woodstock is also the community where The Band, with whom the Felice Brothers are often favorably compared, officially began their Rock and Roll Hall of Fame career in 1967.

After a beginning which saw them performing for donations at New York City subway stations, the Felice Brothers have performed at many of the largest and best music festivals in the U.S., including Bonnaroo, All Points West, Outside Lands, and Langerado. On Aug. 4, the Felice Brothers will join Old Crow Medicine Show, the Dave Rawlings Machine (featuring Gillian Welch), and Justin Townes Earle for the kickoff of the ninecity “Big Surprise Tour” which includes stops in Louisville, Knoxville and Nashville.

MIC HARRISON AND THE HIGH SCORE were photographed in concert at the Bijou Theatre in Knoxville, Tenn. The band will perform at Summit City in Whitesburg on Saturday, July 18. Admission is $5.

“Onstage, the Felice Brothers are super-high energy,” Scaggs wrote in Rolling Stone. “There’s a story about the brothers playing at the 2008 Newport Folk Festival during a wicked thunderstorm. The power was cut, so the guys jumped off stage and played an impromptu acoustic gig in the mud with their fans.”

“That energy came about when we started playing in the streets and in the subways,” James Felice told Rolling Stone. “We just had to be as loud and obnoxious as possible to get people’s attention. To play in a dour sort of way, especially our music, would be ridiculous.”

In a review of the album Yonder Is The Clock, a critic for the

Boston Globe, Scott McLennan wrote, “The new Felice Brothers record has two great songs with the word ‘chicken’ in the title — one of several oddball delights on an album that finds the Catskill Mountains group sounding ever more in command of an unruly tangle of folk, country, and rock. The band does not so much make this record as keep it from flying apart. The intoxicating sound is matched with incisive word play, with the Felices using quirky laments and dark, urban poetry to bridge hillbilly and hipster. Ian Felice doesn’t belt out songs; he sneaks them through a back door in your cranium, and the sparse yet jaunty drumming of Simon Felice, wheezy accordion groove from James Felice, propulsive bass lines by Christmas Clapton, and fiddle and washboard playing by Greg Farley provide the tools to pry open that door. The album ignites the imagination with tales of deceit, deception, and death, but the Felice Brothers leaven the grifter vibes with empathy for the underdog. Sure, the guy in ‘Penn Station’ is as good as dead, but the Felices send him off in footstomping glory.”

The July 17 performance by the Felice Brothers is being sandwiched between shows by two other performers which also promise to be outstanding.

Kicking off three straight nights of music will be a Thursday performance by San Diego singer/ songwriter Carolann Ames.

Ames, born in Wyoming and raised in Texas, has earned a number of awards and honors in just a few years, topped by her Grand Prize win in the 2004 John Lennon Songwriting Contest.

Her latest album, So Long

About Ames, HARP Magazine’s Fred Mills wrote, “Given how the current glut of Americana artists has devalued the field to come across one that restores your faith in the genre is some kind of miracle. Carolann Ames (is) touched by angels as her rich, supple voice soars skyward. Ames traverses the Americana spectrum without repeating herself a single time, and it’s this journey she takes you on that’ll be your ticket to heaven.”

Saturday night at Summit City marks the return of Knoxville, Tenn., rocker Mic Harrison and his band, The High Score.

“Harrison has always had one foot in the honky-tonk and the other holding the door open for honest rock ‘n’ roll,” said a review in the publication CD Baby. “His music is damp from spilled beer and hard-earned sweat after a two-hour show under hot lights in a club with no air-conditioning.”

Harrison is a former guitarist with Superdrag, a highly-acclaimed power pop/alternative rock band whose 1996 song, “Sucked Out,” became a staple on MTV.

Admission to Harrison’s performance, which is also scheduled to begin at 8 p.m., is $5.