Felice Brothers will play here – and at Bonnaroo 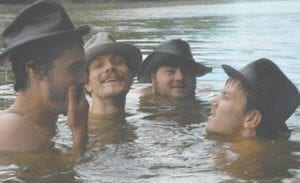 The Felice Brothers have been earning better reviews than the Drive-By Truckers, the band for which they have been opening.

Local music lovers can get a taste of the Bonnaroo Festival without having to leave home next week when The Felice Brothers, a folk-rock and country rock band from upstate New York, visit Summit City in Whitesburg on March 3.

The Felice Brothers are among several acclaimed acts scheduled to appear with Metallica, Pearl Jam, Robert Plant, The Allman Brothers Band and other mega acts when Bonnaroo, the world’s largest music festival, opens on a 700- acre farm in Manchester, Tenn., on June 12.

The Felice Brothers recently have been opening shows – to great reviews – for the Driveby Truckers and the North Mississippi All-Stars. Next Monday night, they will be performing at the 100-seat Summit City on Main Street.

Founded in 2006, the band is comprised of the four main members – brothers Ian Felice, the lead vocalist, guitarist, and piano player; Simone Felice, the drummer who also sings and plays guitar, and James Felice, who contributes vocals and plays keyboards and the fiddle; and their friend Christmas, the bass player for the band. The three brothers are from Palenville, N.Y., a small town in the Catskill Mountains of New York, located about 20 minutes from Woodstock.

In reviewing a Feb. 12 performance by The Felice Brothers, North Mississippi All-Stars and Drive-By Truckers at Hollywood’s Avalon, Variety newspaper said, “Surprisingly, The Felice Brothers had the greatest success, delivering a wonderful opening set that overshadowed the more polished co-headliners.”

The British magazine Uncut said recently of The Felice Brothers, “Evoking The Band and Dylan holed up at Big Pink – this is a gripping intro for these shores.”

Admission to the March 3 concert is $5. Showtime is 8 p.m. Persons wishing more information may call 633-2715 or visit www.summitcitylounge.com.