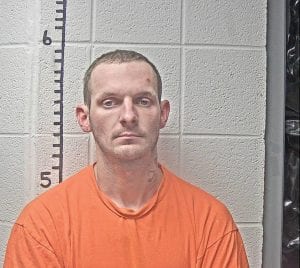 A wanted felon charged with keeping two AR-15s in a storage building at Mayking was arrested Friday when the Letcher County Sheriff saw him go inside a pizza restaurant in Whitesburg.

Sheriff Mickey Stines wrote in a citation that he had previously obtained a warrant for Roger Miles Jr., 26, of Sergent Loop, after he and his deputies served a search warrant on two storage buildings and recovered two AR-15-style weapons and a large amount of jewelry. When Stines recognized Miles walking into Little Caesar’s Pizza in Whitesburg, he called Whitesburg Police for backup and went inside behind him. While Miles was paying for his pizza, Stines wrote, he grabbed Miles from behind and put his arms behind his back, telling him who he was and that he was under arrest.

According to the citation, Miles resisted arrest and Stines told workers to call 911. He said he pushed Miles into a corner of the lobby and Miles continued to fight and tell him he couldn’t arrest him because he wasn’t wearing a uniform.

Whitesburg PD Patrolman Jordan Clemens arrived and the two of them put Miles on the floor and handcuffed him.

Stines said as they walked out, Miles’s car was still running, and when Stines reached inside to shut it off, he saw a camouflage shotgun beside the driver’s seat. A check showed the gun was loaded with five rounds of ammunition.

Stines said Clemens saw a green bottle lid in the driver’s door that had a white powder in it believed to be methamphetamine. Officers also found a medicine bottle with white pills in the glove box, a backpack containing a handgun, a newspaper story about the search of Miles’s storage building, and a set of bolt cutters belonging to the Wise (Va.) Fire Department.

Miles was charged with possession of a firearm by a convicted felon in a warrant obtained as a result of the search warrants filed in January.

He is still being held in the Letcher County Jail.