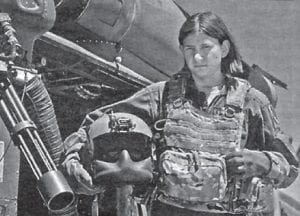 Fresh out of basic training, Airman Natasha Libby was the only female gunner assigned to Nellis Air Force Base, Nevada.

After graduating from high school, Airman Libby realized she couldn’t afford college. She went to an Air Force recruiter, hoping to start a career that would be interesting and fulfill her childhood dream of flying.

Her recruiter asked her if she would like to be an aerial gunner.

She thought that was the coolest job, ever. Her father was very proud, but her mother was scared.

While many see moving away from home for the first time as an obstacle, Libby saw it as a new beginning, providing her the opportunity to make the change in her life that she wanted.

During training, she learned how to handle a weapon while flying, how to use different radios and how to survive during a crash or mishap.

Libby operates weapons systems on an HH-GO Pave Hawk Helicopter, but that is not her only responsibility. She briefs passengers on safety and procedures and performs in-flight maintenance of airborne weapons systems.

Being a woman never has added pressure, she said, but instead has given her motivation to work harder.