Female prisoners happy to be part of work-release program 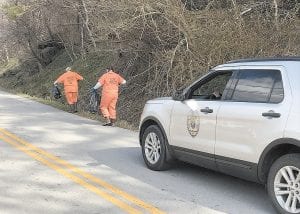 Letcher County Jail inmates Margaret Harris and Rose Newsome were protected from traffic by an SUV driven by Deputy Jailer Elena Hensley while the two were picking up trash last week at Eolia. Harris and Newsome are the first two permitted to take part in a female work-release program. (Eagle Photo)

The third time appears to be a charm for Rose Mae Newsome.

Twice before, Newsome’s name has been in the news, both for a drug-related theft charge. This time she is being written about for doing something good.

“This will be a better headline for me,” Newsome, 38, said during a break from picking up trash along the state highway at Eolia. “I don’t want to make the news like that again.”

Newsome, of Jenkins, is one of two female inmates at the Letcher County Jail who have earned enough trust to be the first two women chosen to take part in the jail’s new work-release program for women.

Newsome and fellow inmate Margaret Harris began taking part in the program last month by cleaning offices in the Letcher County Courthouse. Last week, they were given the opportunity to leave the jail — under the supervision of Deputy Jailer Elena Hensley — to pick up trash along roadways in the county and enjoy some daylight during the process.

So far, the new program has been a rousing success.

After picking up 32 large bags full of trash along the Whitesburg Bypass on February 25, Newsome and Harris collected 46 bags of roadside trash the next day at Craft’s Colly.

“ I am so happy for them,” said Hensley.

Hensley, who is in her first year of working as a jail deputy, said the female work-release program was promised by new Letcher County Jailer Bert Slone during his campaign for office last year.

“Bert was the one pushing for it and he asked me if I would work it,” Hensley said. “He promised he was going to do this.”

Harris, a 56-year-old Seco resident who is also charged with a drug-related crime, has been impressed by Hensley’s willingness to supervise the work-release program and with Hensley’s generosity toward the prisoners.

Asked how it felt the first time they were let out of jail to work, Harris and Newsome exclaimed in unison, “It felt great!”

“When you’re inside you don’t see the sky and you don’t feel the air outside,” said Newsome. “It means a lot.”

“And we don’t mess around because we don’t want to get fired,” Harris said.

The two inmates also have praise for Slone, the former deputy sheriff and school resource officer who began his first term as jailer in January.

“Make sure you put in (the paper) that Bert is the best thing that ever happened to that jail,” said Newsome. “He’s really helping the women.”