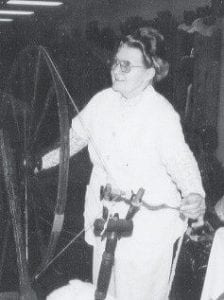 If you ask Fern Cornet what her age is, you might get this answer, “16 years and a few days.” Actually, Fern is 86 years old, born July 3, 1920 in Leslie County. Her advice for a long life is to stay active and not sit down. This is exactly what Fern has done.

The first time she remembers seeing a spinning wheel she was four years old. By the time she was six to seven years old, she and her two sisters were helping their mother and great-grandmother card and spin the wool.

The family had over 100 sheep on the farm from which the wool was obtained. Shearing time was in May. Processing the wool took three days. The wool was washed with a mild soap and warm water two to three times and then laid out on a board roof to dry. On the last day the wool was pulled apart and cleaned (burrs and trash, hay, etc., picked out). The wool was then carded.

Fern says carding is the process of removing tangles from the wool to get it ready to spin. After the wool was carded, the family would use the spinning wheel to spin the wool into thread. The thread was sold to Pine Mountain Settlement School and they would sell it to Berea College to be woven into blankets.

Fern no longer has her own sheep. She orders her wool, which has already been cleaned, from Ohio. She goes through the process of carding and spinning the wool into thread.

By the time she was of school age, which was eight years old in those days, Fern had become well trained on the spinning wheel. There were no school buses and Fern walked one to one and a half miles to Greenhill Grade School. Soon it was time to go to high school and Fern walked two and a half to three miles across Cutshin Mountain to Harlan County to catch the school bus to go to Pine Mountain Settlement School. After two years of high school, she quit. Her father, not wanting a dropout, ordered her a self-taught high school course and she got her GED.

Not long ago Robert Hansel, a Southeast College professor, encouraged her to come to the college and be tested and guaranteed she could pass the first year of college.

On June 11, 1941, Fern married James Frank Cornett and started their family of eight children. Six are still living. James was working at a commissary at a Putney log camp. In 1942, Fern and James with their first child migrated to Ohio to find employment. Fern found a job with Inland Manufacturing Co. where she helped make brake shoes for Army trucks. James went to work for Frigidaire making propellers for airplanes and worked on machine guns. The spinning wheel stayed behind in Kentucky.

After three and a half years, her father-in-law became ill and they returned to Kentucky. Fern started working at Pine Mountain Settlement School as a cook, which lasted 22 years. She won the 2001 cooking award for Harlan County schools. The school has spinning wheels and she soon got back into spinning wool. James worked as a salesman for Kentucky Farm Bureau Insurance.

Ten years ago an uncle gave Fern the spinning wheel her great-great-grandmother had and this is the one she brings with her to festivals and craft shows. The wool she spins today can be used for weaving cloths, sweaters, socks, mittens and scarves. She says to knit and crochet you need a two-ply thread, and for weaving cloths a one-ply.

I first met Fern at a local festival under the demonstration tent. I stood and watched amazed as she went through the process of carding and spinning wool. Each year after that I would find myself looking for her under the tent. Our friendship has grown since last year when I called to ask her to attend the first Indian Summer Folk Festival. She was already obligated to another festival and she said, “You have one when I am not obligated and I will be there.”

It is so pleasant to sit and listen to Fern talk. Her speech is almost poetic.

“I got so much to do I don’t know what to do first. Potatoes to plant, dahlias and cannas to put out. Peas to hoe. House needs painting, quilting needs to be done. One dozen turtles to be stuffed. That’s just a start. Corn needs to be planted and beans. Sweet potatoes set out. About a dozen craft shows to get ready for. Don’t you think that’s enough to do right now?”

Fern will be demonstrating at the first Little Shepherd Arts and Crafts Show at Jenkins May 18-20 at the Little Shepherd Amphitheatre. To get to the site, take Route 3086 off U.S. Route 23 and 119 at Jenkins and go approximately 1/4 mile to Amphitheater Road. For additional information, call Bessie Shepherd at (606) 633- 9123.