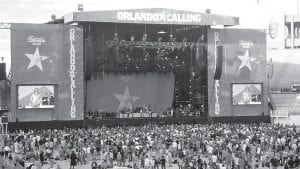 The main stage at the inaugural “Orlando Calling” festival.

There’s no debating the fact the inaugural year of a festival plays a crucial role in determining whether the event will become annual. This was also true for “Orlando Calling,” a festival that debuted on November 12 with a lineup of nationally acclaimed alternative acts and classic rockers in Orlando’s Citrus Bowl football stadium.

The festival’s first day (Saturday) was largely dedicated to alternative musicians. One such band to grace one of five stages that were set up on the stadium grounds was Parachute. These Virginia natives had an impressive first album (“Losing Sleep”) but an average second album (“The Way It Was”), and to most of the crowd members’ dismay the band played an hour set that included only one of their old songs.

The next band that to perform was Gogol Bordello, a Russian Gypsy punk band known for its high energy, theatrical stage shows, As expected, all nine members of the group exceeded the expectations of the festival goers who were wise enough to see this massive band’s set on the main stage.

When Gogol Bordello left the crowd chanting old Gypsy songs, Kid Cudi stepped into the spotlight. Cudi, a well known rapper, knew what to expect at this festival after being one of the closing acts at Chicago’s Lollapalooza and acknowledged the fact that the crowd mostly consisted of alternative music tastes. The rapper did not end his set with his mainstream song “Day and Night,” choosing instead “Pursuit of Happiness,” a lesser known song that features college radio stars MGMT. While that band did not make an appearance, the song was recognized and appreciated by even the most anti-rap audience members on the field.

Following Cudi’s surprisingly enjoyable performance was an act that was even more surprising — The Avett Brothers, whose folkrock sound made it clear the band was far from just another sibling country band.

As more people headed onto the football field where the main stage sat, the sun began to set and the sky turned a darker shade of blue. As the stars began to appear, The Pixies, who rose to stardom in the late Eighties, took the stage. The four members performed their offbeat and witty 1989 album “Doolittle” in its entirety, then finished their set with a few hits not included on the album while making it easy to see why alternative legend Kurt Cobain mentioned them as one of his many influences.

As the night carried on, the Raconteurs took the stage but were allotted less than the two-hour set fans expected. Crowd members were not the only ones angered with the band’s short scheduling. Band members barely talked and took their usual encore song, “Carolina Drama,” out of their onehour set. Still, they were one of the best shows of the festival, which truly demonstrates how tragic it was they were only given one hour.

Saturday’s closing act was The Killers. This Las Vegas- based band performed a two-hour set that consisted of 15 songs and a three-song encore. The first 15 included hits such as “Somebody Told Me,” “Read My Mind,” and “Mr. Brightside,” and ended with “All These Things That I’ve Done.” The band then left the stage with every member the crowd shouting the last lines of their last song, which were “I’ve got soul but i’m not a soldier.” These words were repeated for five minutes until the band finally made a reappearance. The Killers then performed two more songs and rounded their performance off with a confetti-filled rendition of their most popular hit, “When You Were Young.” This touching song made it obvious that the countless hours the audience members waited to ensure a good view was well worth it.

The second day of the festival (Sunday) included mostly country and classic rock groups. Even though these genres heavily dominated the final day of the festival, there were some acts that broke the mold. Among them were Aunt Martha and Orlando’s very own Big 10-4. While not well known, they had amazing sets that proved them both to be bands to watch in the near future.

Other bands to make the scene included groups such as The Doobie Brothers, Kid Rock, and Bob Seger and The Silver Bullet Band. While groups brought a crowd far different than what the stadium had seen only a day before, it was easy to see why they became household names in music.

While the fact remains that a festival’s future depends on how it does during its first year, Orlando Calling’s fate still hangs in the balance. Certainly, the people who attended this inaugural event hope it will carry on, because if any other Orlando Calling took place that was even half as good as the one that they saw during these two days, they would be satisfied for a long time.

“Listen To The Music” — The Doobie Brothers

“When You Were Young” — The Killers

Twins Cassidy and Kennedy Breeding are freshmen at Letcher County Central High School. “Orlando Calling” is one of several music festivals and concerts they have attended during 2011.