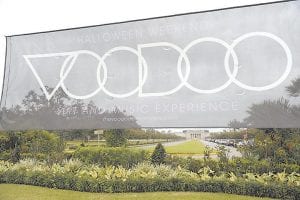 A large sign in front of the New Orleans Museum of Art in City Park welcomed music lovers for the Voodoo Art and Music Experience during Halloween weekend in New Orleans. (AP Photo)

Less than a month before New Orleans would host its 14th annual Voodoo Festival, plans were rattled when the festival’s main headliner Green Day announced its withdrawal from the three-day music event so that lead singer Billy Joe Armstrong could be treated for substance abuse.

While Green Day’s exit was expected to cause a decrease in this year’s expected record-breaking crowd, those apprehensions disappeared when the festivities continued in full force with metal legends Metallica substituting for the recent dropouts.

Opening its gates on Friday, October 26, in City Park, Voodoo Fest started with a bang. One of the first main acts to hit Le Plur, the stage hosting mostly DJ sets, was Die Antwoord. The South African rap group made their set memorable with shocking stage antics and an odd sound that is impossible to define by any genre of music. Also drawing a big crowd on Friday evening was soul musician Gary Clark Jr. Playing on the Le Ritual stage, it was clear to see why the guitarist and singer has headlined many festivals this season. 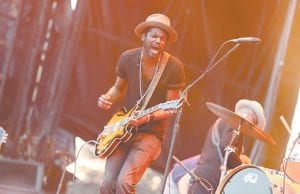 Following Clark’s performance on the main stage was the high energy, Americana sibling band The Avett Brothers. Consisting of brothers Seth and Scott Avett, accompanied by several other band members (including an extremely talented cello player as well as a bass player), the fivepiece band’s jovial spirit proved to be contagious. As fans clapped and sang to songs including “Kick Drum Heart” and “Live and Die”, older brother and lead vocalist Scott Avett stressed “Only if you want to!” sending waves of comfort through the crowd. Before playing the final songs of the set, Scott took a moment to take in the band’s surroundings.

“We are so happy to be back in New Orleans,” he said. “There’s a certain kind of joy, a certain jubilation you people have.” With those words the band began to play and both Avetts leapt off the stage as Scott ran through the crowd, giving high fives to as many audience members as the time permitted while Seth stood inches away from lucky crowd members playing his guitar.

Closing the festival on Friday night was Rock and Roll Hall of Fame member Neil Young, whose two-hour set consisted of 12 songs including the new “Born in Ontario” and old favorites “The Needle and The Damage Done” and “Cinnamon Girl”. The set was mainly noted for Young’s intricate guitar jams that left the audience in awe. After playing his set, Young left the stage only to return minutes later for his encore, “Like a Hurricane” during which Young broke every string off of his guitar as the audience erupted with cheers of approval.

The next day of Voodoo was just as successful. With acts including Soul Rebel’s Brass Band as well as The Features the day had promising beginnings. Other bands performing on Saturday included AWOLNATION, who was introduced by former Kentucky MVP basketball player Anthony Davis (now residing in the Jazz City and playing for its NBA team). AWOLNATION played a set filled with several synth-rock hits including “Sail”, “Kill Your Heroes” and “It’s Not Your Fault”. During this set, lead singer Aaron Bruno took a literal approach to crowd surfing and showed off his California background while using a surfboard to ride through the top of the crowd before dedicating the band’s performance to the night’s headliner’s, Metallica.

After AWOLNATION left the stage, fellow California band Silversun Pickups played. Despite band member Nikki Monninger being unable to appear with the band (which was later explained by lead singer Brian Aubert when he revealed that the bassist was “very pregnant with twins”) the group played without problem with a substitute bassist.

After The Silversun Pickups played their final song “Lazy Eye” it was finally time for Metallica to appear. Despite being 30 minutes late the audience quickly forgave the group as they thrashed through their opening song “Hit the Lights”. Wasting no time, the metal legends played an impressive 23 songs in their two-hour set. The group played with the intricate synchronized ability that only comes from being an experienced band. They continued to be spot on as they played their 1991 hit “Enter Sandman” before leaving the stage then reappearing for an encore.

Earlier in the show, singer James Hetfield addressed the circumstances that brought them before the Voodoo crowd jokingly saying “We’re Green Day, just a little taller.” Hetfield readdressed these circumstances during the encore but this time with a more serious tone, “They’re getting sorted out. Hopefully they get it fixed because the world needs them.” After those words the group did a cover of Green Day’s “American Idiot” before finishing their set with “Seek and Destroy”.

The final day of Voodoo opened with great up and coming acts including Royal Teeth, Black Box Revelation and Vintage Trouble. Vintage Trouble, a band that few people knew about, was quick to impress the crowd with their retro sound. Front man Ty Taylor could have easily been mistaken for a young James Brown. Following Vintage Trouble were alt rockers Coheed and Cambria. Lead singer and guitarist Claudio Sanchez showed his expertise on the guitar while playing songs including “A Favor House Atlantic”, “Welcome Home” and a song from their new album “The Afterman”. Other headliners playing on Sunday were Brooklyn rapper Nas and dubstep artist Skrillex. The coveted role of closing down the festival belonged to Jack White.

White, whose band The Raconteurs closed out Voodoo Fest in 2011, brought his solo act to the same stage almost a year later. He used this appearance to let his all-male backup band, The Buzzards, play the whole set. (White also tours with an all-female band, The Peacocks.) During his hour and a half set he played a total of 19 song from his entire catalog, including songs “Hello Operator” and “Fell in Love With A Girl” by his former band The White Stripe, “Top Yourself” and “Steady as She Goes” by the Raconteurs, “I Cut Like A Buffalo” by The Dead Weather as well as songs from his debut solo album Blunderbuss. During this set it was clear how talented his backup band was, with diverse musicians, including a piano player that frequently played his instrument with his feet. White finished his set and closed the festival with The White Stripe’s stadium anthem “Seven Nation Army”.

Though this year’s Voodoo Fest faced several obstacles, it only proved Scott Avett right when spoke of the people of New Orleans. Not only are they joyful through every circumstance, good or bad, they are resilient and refuse to let a few bumps in the road stop them from their plans. This is why people travel from all around the nation to attend this festival.

•“I’m Slowly Turning Into You” — The White Stripes

•“Murder In The City” — Avett Brothers

•“First Of The Year (Equinox)” — Skrillex