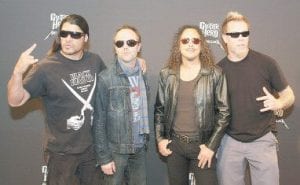 Not long after the last guitar is strummed, the final beer is downed and East 6th Street clears out, the discussion of which acts made a mark at South By Southwest begins.

For better or worse, that amorphous thing called “buzz” has become a central part of modern music listening. Bands are built up by hype on the Internet and tastemaking blogs drive audiences by declaring the next cool thing.

Nowhere is the omnipresence of expected buzz more manifest than at SXSW, the annual music conference and festival that concluded its 23rd annual event early Sunday after four nights of revelry.

With some 1,900 acts packed into just about every venue in downtown Austin (including a church and an old Safeway supermarket), a pack mentality in the audience can set in as attendees — mostly industry reps and press — flock together looking for new sound from established acts and first-timers.

Among the established acts was Metallica, promoting a new videogame, who played a semisecret, intimate show for 2,100 — if a thunderous heavymetal band can play an “intimate” show.

Kanye West performed twice, once at a showcase for his G.O.O.D. Music record label, the other in a surprise appearance at the party hosted by celebrity blogger Perez Hilton. Big Boi, half of the rap duo OutKast, was eager to talk about his upcoming solo album but less so to perform songs off it, instead playing older material.

Other veteran acts who performed included Echo & the Bunnymen, Devo, P.J. Harvey, Primal Scream and the reunited Jane’s Addiction. And some of the most popular shows were those by indie heavyweights like the Hold Steady, M. Ward, Andrew Bird, Grizzly Bear and the Decemberists, who performed their new operatic concept album “The Hazards of Love” in full, webcasting it for NPR.org.

But much of the energy of SXSW was in discovery.

The buzz cycle has become familiar to music fans after watching it play out for indie bands like Vampire Weekend, Cold War Kids and Arctic Monkeys.

At times, the attention comes like a tidal wave. Last year, Vampire Weekend frontman Ezra Koenig said in an interview that they finally were graduated from being a “normal band” and that they had “paid their dues” in buzz.

At SXSW, Grizzly Bear singer Edward Droste felt sympathy for young bands celebrated too enthusiastically too soon. The climb for Grizzly Bear, the band says, has been gradual and manageable.

“It can be really detrimental to explode too quickly,” said Droste. “For me, personally, the music that I like the most is the stuff that takes a little time to grow with and has a bit of longevity. There are albums that I’ve jumped on and been like ‘Yeah!’ and then three months later, I’ve been like, ‘Nah.’ It’s sort of the nature of the beast.”