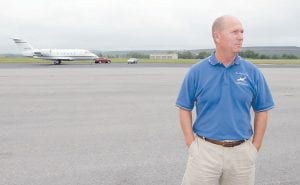 Gary Cox, general manager of Big Sandy Regional Airport, stood on a runway which was once the site of a coal mining operation near Inez, Ky., last August. (AP Photo/James Crisp)

A short drive up a side road through dense Appalachian forest ends at a vast, flat clearing where a mountaintop used to be.

The peak that stood for an eon is gone, replaced by a giant recreation area that was built after a coal company scraped away thousands of tons of earth, lowering the mountain by 200 feet.

Coal industry supporters say the Knott County Sportsplex in eastern Kentucky is one of many examples of economic opportunity created by strip mining techniques that include the oftenvilifi ed method known as mountaintop removal.

But data obtained by The Associated Press indicates that just a small percentage of the leveled Appalachian mountain landscape has been transformed into new developments such as businesses, prisons, golf courses and subdivisions.

Business and political leaders in the two Appalachian states most dependent on coal have held up the developments as an economic necessity and a justification for blasting away mountaintops in the depressed region, where most well-paying jobs are connected to coal.

“It really drives home the point of how much of a need there is for usable, accessible land in the mountains,” said Kentucky Speaker of the House Greg Stumbo, who built his home on a reclaimed mining site.

“A lot of people through the years ask why Appalachia is so poor. One of the biggest reasons is we were land poor — we didn’t have any place to build,” the Floyd County Democrat said.

The West Virginia Department of Commerce issued a press release earlier this month that said developments on former mining sites have created more than 13,000 jobs in 12 counties.

Republican Sen.-elect Rand Paul has said the mining practice “enhances” the land, and West Virginia Democratic Sen.-elect Joe Manchin calls the post-mining lands a “principal tool” of redevelopment. Both men spoke of the need for flat lands in Appalachia during their U.S. Senate campaigns this year.

The AP obtained post-mining land use records from Kentucky and West Virginia, the two states where Appalachian strip mining is most prevalent. In 2009, those states accounted for nearly threequarters of the coal taken from surface mines in the 13 Appalachian states.

Of the more than 345,700 acres of mining lands in eastern Kentucky that have been approved for a specific post-mining purpose, just over 6,300 acres, or about 1.8 percent, have been designated for “commercial,” ‘’industrial” or “residential” developments, according to data provided by the state Department of Natural Resources. The figures date back to 1999, but could include some land permitted before that time, officials said.

State officials said those figures don’t include developments that can be sought by private landowners after the state ends its oversight of the mined land.

Since October 2001, West Virginia has granted 218 surface mining permits, covering 84,793 acres. Of that acreage, 6,035 acres, or about 7 percent, have been designated for industrial/commercial, public service or residential development, according to data provided by the West Virginia Department of Environmental Protection’s Division of Mining Reclamation. The developed land includes an athletic complex, livestock fields and a subdivision.

The West Virginia data also does not include development sought by private owners after state oversight ended.

The vast majority of the postmining land uses in both states were designated for fish and wildlife habitat, forest or pasture lands.

A Washington-based environmental group found in its own study that economic developments in four Appalachian states have been sporadic on lands where mountaintop removal and other mountain strip mining occurs.

A survey late last year from the Natural Resources Defense Council claims that nearly 90 percent of 410 sites surveyed “had no form of verifiable post-mining economic reclamation excluding forestry and pasture.”

The report used aerial photography and counted 500 sites in Kentucky, Tennessee, Virginia and West Virginia where a mountain peak had been reduced by at least 50 feet due to mining. Ninety sites were excluded due to active mining. The report declared that only 26 sites in the four states were host to some form of verifiable postmining economic development.

Coal industry supporters said despite the low rates, the developments that do occur are beneficial to the local economy.

“Assuming (the AP’s data) is correct, then you at least have substantial development that follows these mining operations that you perhaps would not have had, had mining not have occurred,” said Chris Hamilton, senior vice president of the West Virginia Coal Association, a pro-industry group.

Industry supporters also said not all former mining sites are prime for development, especially on the often remote and rural terrain of Appalachia.

“The further you get away from a community or an infrastructure where you have gas and water and sewer lines, you can’t develop out in the middle of nowhere without the proper utility structure,” said Phil Osborne, Kentucky executive director of the Federation for American Coal, Energy and Security, known as FACES of Coal.

Osborne said there are other economic uses for post-mining lands, such as grazing land for cattle, or ATV or other recreation trails.

The Obama administration’s efforts to curb mountaintop removal mining have spurred the industry and its allies to intensify efforts to demonstrate coal’s importance to the region. FACES of Coal organized a rally in Washington in mid-September that drew hundreds of central Appalachian miners and political leaders who complained that federal government regulations are suffocating the coal industry.

Osborne, a public relations executive in Lexington, said the administration’s stance has unified pro-coal efforts in several states. Osborne took an AP reporter on a tour in August of several postmining sites that have been turned into economic developments.

Stumbo’s home in Prestonsburg stands near the manicured, 18-hole Stone Crest Golf Course, also built on top of a reclaimed mine. It’s the same golf course where coal supporters posted a sign in July mocking actress Ashley Judd for her outspoken opposition to mountaintop mining.

About 20 miles northeast of the course is the Big Sandy Regional Airport, which was built after the removal of a 10-foot high coal seam. In mid-August, a private jet owned by Massey Energy, a company with massive mining operations in Kentucky and West Virginia, was docked on the runway near an airport sign that reads “Made Possible By Coal Reclamation.”

The airport’s manager, Gary Cox, said the general aviation facility that handles mostly coal industry-related private aircraft and a nearby state prison with 400 employees wouldn’t have been built if mining companies hadn’t flattened the hills.

“There’s not much flat land in eastern Kentucky, and if it is, it’s usually in the flood plain,” Cox said.

The airport was built at an elevation of 1,220 feet in the mid- 1980s, a few years after Congress passed the Surface Mining Control and Reclamation Act of 1977.

The law, aimed at striking a balance between coal production and environmental protection, sets guidelines for use on post-mining sites. It requires surface mining sites to be restored to pre-mining conditions but a provision that allows exemptions for “higher or better uses” is the one often used for such developments.

Rob Perks, director of the NRDC’s advocacy campaigns, said the industry distorts the prevalence of development on post-mining sites to put a positive spin on Appalachian strip mining.

Supporters tout the developments “for the purpose of saying, ‘Look we have some poster children to show you,’” Perks said. “They say, ‘These sites are there, therefore you should just trust us that we’re going to do this over and over again.’”

“But we’re talking about over 500 mountains that have been lost” according to the NRDC study, he said.

Osborne says post- mining lands have also provided places for elk herds to roam in eastern Kentucky. The animals were reintroduced in 1997 after being gone from the state for 150 years. State officials say they now number 11,000.

But the mining removes most of the existing ecosystem at the site, said Doug Doerrfeld, an Elliott County resident and member of the environmental group Kentuckians for the Commonwealth.

“They just bulldoze it, compact it and plant a couple of different species, and then if they see elk walking across it or turkeys, they claim that that’s been an enhancement and a higher and better use of that land,” Doerrfeld said. “And I don’t think a reasonable person could agree with that.”

Hamilton said mining critics should consider the jobs created when mines are operating, long before the land gets developed for other uses.

“The part of that whole story that doesn’t really get highlighted is that however long that mining operation existed … that company is providing gainful employment, and just creating employment opportunities for workers to provide for their families for years,” Hamilton said.