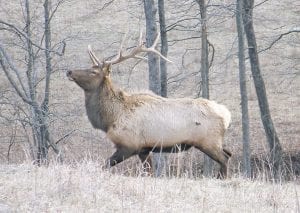 KNOTT COUNTY IS ‘ELK CAPITAL’ — This file photo provided by the Kentucky Department of Fish and Wildlife Resources shows a bull elk as it bugles for a mate at a reclaimed coal mine site in Knott County. Elk disappeared from Kentucky around the time of the Civil War, mainly because of overhunting. They returned in 1997, when wildlife managers started the restoration by bringing in elk from several Western states. Kentucky’s first elk hunt in the modern era was held Oct. 6, 2001. So far this year, hunters in Knott County have killed a state-leading number of 74 elk, a staggeringly high number compared to only seven elk taken in Letcher County so far this year. (AP Photo/Kentucky Dept. of Fish and Wildlife Resources/Dan Crank)

A total of 432 deer have been killed so far in Letcher County during the fall 2013 hunting seasons, according to statistics from the Kentucky Department of Fish and Wildlife Resources. The number represents a considerable decrease from the all-time high of 602 deer killed here in 2012.

Of the total killed by hunters in Letcher, 305 were bucks and 127 were does. Hunters took 275 deer during the firearms season, and so far have taken 105 by archery; 31 by crossbow and 21 by muzzleloader.

A free youth deer hunting weekend will be held Dec. 28-29 and is open to hunters ages 15 and under. The youth can hunt deer of either sex with a firearm and without a license, but must be accompanied by an adult.

Meanwhile, Knott County continues to live up to its name as the “Elk Capital of the East,” as it again is leading the way in the number of elk killed by hunters (74) so far during the 2013 seasons — 20 more than runner-up Leslie County.

Only seven elk, all male, have been killed in Letcher County this year, one during archery season and six during firearm season. Hunters killed 14 elk in Letcher in 2012.

Hunters in Perry County have reported killing 21 elk so far this year, while those in Pike have killed 14. Eighteen elk have been killed in Harlan County and 19 have been taken in Bell County.

Only 12 wild turkeys — five male and seven female — have been killed in Letcher County during the fall hunting seasons. Nine of those were killed during the shotgun season, which shut down Nov. 1 and will reopen Dec. 7 and end Dec. 13. One wild turkey was taken by archery and two by crossbow. Archery season for wild turkey ends Jan. 20, while crossbow season ends Dec. 31.

Since the firearm bobcat season opened Nov. 23, three have been killed in Knott County (two male, one female), one in Perry County, and one in Harlan County.

Three bobcats have been trapped in Harlan County and two in Pike County.

In October, the Department of Fish and Wildlife Resources adopted new regulations to allowing hunters to use a shotgun to kill coyotes at night year round. Lights or night vision equipment can only be used from February 1 through May 31.

A shotgun is the only legal firearm for night coyote hunting. Hunters will not be able to use slugs. Decoys and electronic calls will be allowed.

Hunters on private property must have permission from landowners to be there.

The night light season will correspond with the time of year when deer have shed their antlers. This should lessen the motivation to poach deer. Late winter is also when vegetation is at its lowest, food is most scarce and when coyotes are actively breeding, making them easier to call into a set up. Lights cannot be connected to or cast from a vehicle. Any color of light can be used.

Daytime hunting for coyotes is open year round. Hunters may use shotguns, centerfire rifles, bows, crossbow, air guns with a minimum size of .22-caliber and rimfi re rifles during daylight hours.

There is no limit on the number of coyotes that hunters may take at night or during the day.