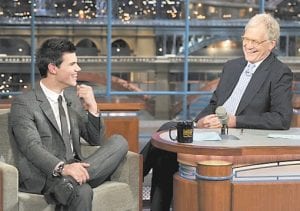 Jay Leno and David Letterman are in the twilight of their days as late-night TV kings, and it’s not clear that any late-night comic will wield that kind of broad influence again.

Late-night ratings sank over the past three months, despite the attention and extraordinary television created over the winter by the drama of Leno taking back “The Tonight Show” from Conan O’Brien.

“Late-night talk shows have been around since the 1950s, and you wonder if they are getting passe with the viewing public,” said Brad Adgate, an analyst with Horizon Media.

Competition is a factor. Johnny Carson in his prime never had to worry about a Jon Stewart or George Lopez. Or video games and the Internet. Or, for that matter, his own network. At 11:35 p.m., more people now watch programs saved on their digital video recorders than either Leno and Letterman, the Nielsen Co. said.

Back at NBC, Leno averaged 4 million viewers a night during April, May and June. That’s a full 1 million viewers lost to NBC compared to the same three months in 2009. Letterman wasn’t necessarily the beneficiary, since his audience of 3.3 million people was off 7 percent from 2009.

An hour later, NBC’s Jimmy Fallon and CBS’ Craig Ferguson are both down, with Fallon’s nightly audience of 2 million last year slipping to 1.64 million. Comedy Central’s Stewart and Stephen Colbert are essentially drawing the same numbers as last year.

TBS may be excited about O’Brien bringing his fans over this fall, but they may want to pause at Lopez’s numbers. Lopez, who has the time slot O’Brien will take over, saw his numbers dip by 20 percent to 820,000 a night.

Bright spots are ABC’s Jimmy Kimmel, who was aggressively promoted by his network this spring, and E! Entertainment’s Chelsea Handler. ABC’s “Nightline” is also up slightly in viewers and consistently beats Letterman.

NBC executives would not speak publicly about the late-night ratings, while privately taking a glass half-full approach to Leno. They note that he’s back to surpassing Letterman after O’Brien had fallen behind his CBS rival, and that he’s done so despite a beating from critics who believed he should not have taken his time slot back from O’Brien.

“It might make them feel great, but it doesn’t mean anything,” said Bill Gorman, who runs the TV By the Numbers website. He argues that Leno’s smaller audience means more than his competitive position.

NBC also says 2009 isn’t a fair comparison because secondquarter ratings were inflated due to Leno’s exit from the time slot and O’Brien’s start then. Leno averaged nearly 4.9 million viewers for the second quarter in 2008.

Behind the raw numbers for the talk shows in that period is the way DVRs continue to revolutionize viewing habits. During the Leno and Letterman time slots, an estimated 5.4 million people were watching something they had recorded earlier — often from prime-time that night. That’s up 22 percent from 2009, Nielsen said.

Talk shows tend not to be saved for later viewing as much as dramas or comedies.

Television networks have also — in some cases, reluctantly — embraced the Internet and made monologues and other highlights from the talk shows easily available to see online the next morning. Their theory is this increases the visibility of their late-night stars. It’s still early, but there’s evidence that people are growing comfortable in not watching the late-night shows since they know they can easily catch up the next day.

“When Jimmy Kimmel went on as Jay Leno, I watched that online,” Adgate said. “I don’t stay up and watch them.”

Leno and Letterman are increasingly being identified as an older generation’s talk show hosts. Nielsen said the median age of a Letterman viewer was 55. Leno’s audience used to be younger, but is now 56.

Kimmel’s audience went up by 10 percent to 1.7 million people for the period ending with June. ABC pushed Kimmel forward, believing he could take advantage of the NBC turmoil, and worked on approaches that could serve as a template for others. He does increasingly elaborate comic bits that are designed as much for Internet penetration as for his show. ABC also scheduled prime-time specials around events like the NBA Finals.

“We gave this show a lot of opportunity for additional exposure,” said Danielle Greene, vice president of late night for the ABC Entertainment Group.

Stronger ratings for “Nightline” may have helped Kimmel, too.

Perhaps most alarming for network executives is that the ratings sag came after a stretch of time last winter when shifting latenight hosts were front-page news, a riveting personal drama that the hosts were eager to play out in front of the camera. O’Brien’s aggrieved final shows on NBC drew big ratings and won his staff an Emmy nomination for writing.

Yet there have been no lasting benefits.

The ratings trouble “has happened pretty quickly,” Adgate said. “We’re kind of at a crossroads to see which direction it’s going to go.”