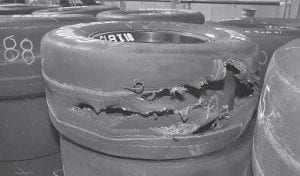 A damaged right rear tire sat in the garage area during the race at Indianapolis Motor Speedway. (AP Photo)

The NASCAR race at Indianapolis Motor Speedway on Sunday was a debacle. No point in denying it.

But NASCAR was faced with the unenviable task of trying to salvage a Brickyard 400 race that was destined to look like stalled, rush-hour traffic.

When it became obvious in Saturday’s practice sessions that the tires Goodyear brought to Indy had a serious durability issue, there was only one option for NASCAR a day ahead of the green flag: Sort out how to stage a safe race.

Formula One and Michelin learned that at Indy in 2005, when three-fourths of the field refused to compete in the United States Grand Prix because of tire concerns. Indy took a hit, the race never recovered and F1 isn’t racing in this country.

“Here they do. NASCAR will do whatever is possible to put the show on in the best way possible.”

And that’s exactly what NASCAR tried to do, relying heavily on deliberate caution flags that slowed the pace of the 400-mile race and forced teams to change tires every 10-to-12 laps. It meant a record 52 of the 160 laps ran under caution, with the longest green-flag run a mere 13 laps.

The victor on Sunday was decided by a seven-lap sprint to the finish that saw Jimmie Johnson win the race off pit road then hold off Carl Edwards and Denny Hamlin to grab his second Brickyard title in three years.

To call it horrible racing is an understatement, and the participating drivers didn’t mince words.

“Didn’t see much of a race,” Matt Kenseth echoed.

But their ire wasn’t aimed square at NASCAR. Across the board, everyone understood NASCAR did the best it could with what it had to work with.

Goodyear tested the tires it brought to Indy back in April, when Vickers, Dale Earnhardt Jr. and Kurt Busch experimented with several different compounds to help the tiremaker find a match for Sunday. Although the tires in that two-day stretch seemed to last somewhere around 15 laps a run, Goodyear wrongly believed their durability would improve once the full field took to the track and began laying rubber on Indy’s abrasive surface.

Where Goodyear went wrong was underestimating the effect of NASCAR’s current car, a heavier new model that puts a ton more stress on right-side tires than last year’s car.

The tires at Indy couldn’t hold up to the pressure, and the rubber Goodyear had assumed would stick to the track never happened. Instead, the surface became the equivalent of a cheese grater, turning the rubber into a dust that never settled onto the surface.

With tires worn down to their cords, failures were almost certain every 10 laps.

So NASCAR stepped in with competition cautions, which didn’t give teams a chance to push their tires to the limit. Given the opportunity, teams certainly would have raced through the durability window — a situation that likely would have created multiple tire failures and many wrecks.

It was a decision based on experience. Durability issues at Lowe’s Motor Speedway in 2005 produced record cautions and dangerous racing conditions, when tires began popping like balloons. All NASCAR could do to stop it was a mid-race mandate on air pressures.

“Hindsight is 20/20,” said vice president of competition Robin Pemberton, who patrolled pit road during the race so he could examine the tires up close and help the officials in the tower decide how to proceed.

Using a different tire wasn’t an option, either. Although Goodyear shipped in an emergency allotment of tires it had earmarked for this weekend’s race in Pocono, at least one manufacturer ran a simulation on that compound and determined the reserve tires would have been a dangerous 2 seconds faster per lap than the Indy tires. It would have created a major speed change not adaptable to the gear ratios and rev limits programmed for Indy.

Still, NASCAR failed to hold an open test session at the track, something that’s been consistently done in past years.

Once the tires started failing during the test, and Goodyear saw the tires weren’t laying any rubber on the track, there’s no chance the company would have brought the same compound to Sunday’s race.

As the only tire supplier in NASCAR, the company is not subjected to competition from other makers. Its position as the only player in the game means its even more important that Goodyear avoids the blunders it made coming into Indy.