Fibroids in uterus are noncancerous 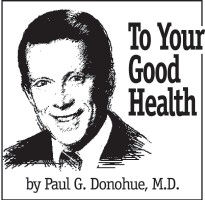 DEAR DR. DONOHUE: I had stomach pain for two weeks and finally had an ultrasound of my abdomen. Nothing bad was found, except for a fibroid in my uterus. The doctor said this had nothing to do with my pain. He must be right, because the pain went away. Do I need to pursue the fibroid thing any further? The doctor never said I should. – L.C.

ANSWER: Fibroids are benign (not cancerous) growths of the uterine muscle. The uterus is a muscular sac with a specialized lining for the support of a developing fetus. Fibroids are very prevalent. Forty percent to 50 percent of women over the age of 35 have one or more of them.

Their cause is baffling. Genes have some role, because they run in families. Hormones influence their growth. As evidence of that, they enlarge during pregnancy and usually regress after menopause, when estrogen production wanes.

Most often, fibroids are incidental findings that need no attention. I’m putting your fibroid in that category.

Troublesome fibroids can lead to heavy menstrual periods. Sometimes they’re the source of pelvic pain. Large fibroids pressing on the bladder give rise to frequent urination. Large fibroids also can complicate pregnancy, depending on their size and location. Extremely rarely are they implicated in infertility.

You should let your gynecologist know that a fibroid was discovered, but you don’t need to take any more action than that.

The fibroid booklet discusses this common condition in detail. Readers who would like a copy can obtain one by writing: Dr. Donohue – No.1106W, Box 536475, Orlando, FL32853- 6475. Enclose a check or money order (no cash) for $4.75 U.S./ $6 Canada with the recipient’s printed name and address. Please allow four weeks for delivery.

DEAR DR. DONOHUE: I have a tremendous itch problem. If I rub the skin on my arms just a little, it will itch for quite a while. After I take a shower, I itch for an hour or more. When I get hot and perspire, I itch. I would appreciate your help. – H.B.

ANSWER: Water (especially hot water), heat, sweat, a light touch to the skin and emotional stress can bring about a release of body chemicals like histamine that make the skin itch. This doesn’t happen to everyone, but it happens to enough that it’s a relatively common problem. Antihistamines might bring you relief, but be careful: Some are sedating.

Some illnesses cause itching. Diabetes, liver disease, thyroid problems, kidney failure, cancers like lymphomas and the blood disorder polycythemia are itch makers. Your doctor can investigate any of these that might apply to you.

The biggest cause of itching is dry skin. Take only lukewarm showers or cool baths. Immediately after washing, apply a moisturizer. Don’t wear woolen clothes.

DEAR DR. DONOHUE: I have been taking the expensive drug Lipitor for nine years. When can I expect to see a generic Lipitor on the market? – G.L.

ANSWER: The patent on Lipitor (atorvastatin) expires in 2010. Lipitor is one of the statin drugs, the widely prescribed medicines for the lowering of cholesterol.