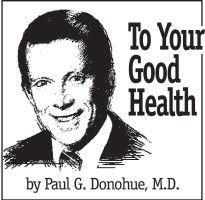 DEAR DR. DONOHUE: I have recently been diagnosed with fibromyalgia. Before I was diagnosed, I enjoyed playing many sports and was a very physically active person. Since then, I have had to stop most of my activities. I wish I could be as active as I once was. Every time I try to play or exercise, my muscles ache unbearably. How can I get back to where I was? — R.C.

Fibromyalgia causes people to retreat from their usual activities and makes them yearn for the days before it struck.

It’s a peculiar disorder, with more unknown about it than known. Its cause hasn’t been discovered. More women come down with it than men — another unexplained fact. No lab test detects it. X-rays, scans and ultrasound show no abnormality

People afflicted with it complain of widespread body pain. They hurt all over, especially muscles, bones and joints. Exercise aggravates the pain. Joints are stiff early in the morning. Fibromyalgia patients are tired all the time. They never get a decent night’s sleep, and that adds to their fatigue.

During an examination, doctors can detect tender points, specific body sites where pressure of the examining finger elicits pain out of proportion to the pressure. There are 18 of these sites, nine on each side of the body.

More than 70 medicines have been used in treating fibromyalgia. Tylenol and anti-inflammatory medicines such as Aleve, Advil and Motrin are helpful for some. Cymbalta and Lyrica are two medicines that have won Food and Drug Administration approval for treatment of this condition.

Exercise is important, but it must be started at a low level and gradually increased. Water exercises are well-tolerated. If a person can’t keep up with the rest of the class, he or she shouldn’t try to do so. Keep exercise at a level that’s tolerable.

DEAR DR. DONOHUE: I have what the doctors call black hairy tongue. Can you tell me about it? — Anon.

ANSWER: Black hairy tongue, aside from its looks, is an innocent condition that comes from the elongation of tongue papillae, tiny projections from the tongue’s surface. Gently brushing the tongue three times a day with toothpaste, baking soda or 3 percent hydrogen peroxide can usually get rid of it. If it’s not gone in a month, return to the dentist or doctor for a follow-up exam.

DEAR DR. DONOHUE: We were told to drink six to eight glasses of water a day. A doctor on television said to drink water only when you are thirsty. Which is the right advice? — R.L.

ANSWER: It’s not necessary to drink six to eight glasses of water a day. Most people can let thirst be their guide. In very hot weather, a couple of extra glasses of water keep a person hydrated.