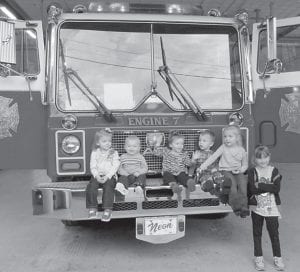 — A group of two- to four-year-olds has been gathering once a month for Field Trip Fridays. The group is open to any preschooler and parents. The children recently visited the Neon Volunteer Fire Department. Pictured (left to right) are Nazariah Duty, Titus Duty, Amirah Cook, Bishop Sexton, Mia Sexton and Jasmine Sexton. For more information, contact Dedra Burke Duty on Facebook.

eyes were bugged out and my mouth dropped open because I was absolutely astounded and unable to lay the book down. It’s not fiction at all. It is easily the best and most interesting series of essays on historic events and places in the eastern Kentucky and southwestern Virginia mountains that I’ve ever had in my hands.

It certainly is not a comprehensive history, nor does it claim to be. It simply contains the author’s analysis of numerous, often-tragic events that helped to shape the values and culture of the high country that we natives of one little section of the hills call home.

Maynard Cornett Adams was born, as near as I can tell, around 1930 at UZ, a small community on the upper North Fork of the Kentucky River, seven miles or so downstream from Whitesburg. His family later moved to Dry Fork, a nearby tributary of the river, and later to McRoberts and Jenkins, where he finished high school.

After high school, he attended Morehead State College and Coyne Electrical School in Chicago, where he earned a degree electricity and electronics. After career stints in Texas and New Mexico, he moved to Colorado where he has lived for the last 45 years. After retiring in 1997, he began a second career in writing and publishing. He has written several historical novels set in the West.

Eastern Kentucky Short Stories is the culmination of more than four years of dedicated research, including numerous interviews conducted during frequent trips back to the hills of home. The last 20 pages of the book detail reference sources and a bibliography Adams relied on to document his work. Several articles from The Mountain Eagle, written as many as 100 years ago, are cited and I found it interesting to compare writing and reporting styles from then to now.

The book is laced with several humorous and insightful personal essays about growing up in Letcher County during the Great Depression and the early years of the coal industry. It contains some insight into the lives of several early, notorious politicians and other unsavory characters. Several essays are dedicated to murders, hangings, lynchings, and ambushes.

A dozen or so pieces document Civil War activity in the mountains. Several others describe feuding activity. I found myself totally fascinated with Letcher County’s Wright-Reynolds Feud and found myself embarrassed that I’d scarcely heard about it. Hair-raising stories having to do with Ku Klux Klan activity in the hills also surprised me.

The bottom line is that there is something here for anybody interested in the formative years of Letcher County, as well as Pike, Harlan, Knott and Perry counties in Kentucky and Wise County, Virginia.

The book contains 460 pages when introductory material is included. Included are hundreds of photographs, portraits and illustrations and not an inch of available space is wasted. The pages are literally crammed with concise information.

At this writing, the easiest way to get a copy of the book in the Letcher County area is to visit the John B. Adams Store at Isom or Heritage Nook Books in Pound, Virginia.

The book is also available at Top Drawer Gallery in the Old Town section of Berea, Kentucky. I would also suggest that book stores or other retailers interested in stocking the book get in touch with the author at 303-857-6122, email him at mcabooks@live.com, or write to the address above. Mr. Adams allows retailers a generous profit margin as well as free shipping for orders of more than 12 copies.

I will finish my second reading of Eastern Kentucky Short Stories tonight, but I have marked at least a dozen places in the book that I intend to read, yet again.

Ike Adams is a Letcher County native, reared at Blair Branch near Jeremiah.