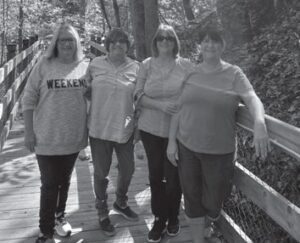 These sisters are out enjoying fall and time together. Pictured are Helen Roberts, Ella Caudill, Libby Honeycutt, and Juanita Caudill.

Hello everyone. I hope all had a good week and weekend. With the rain and colder weather we had on Monday, it feels like late fall. I did enjoy watching the leaves fall with all of the wind we had. I do like falling leaves.

Happy birthday to our son Mark. His birthday is on October 31. I hope he has a wonderful birthday.

Feel Better Wishes are being sent to: Janice Wolod and Randy Brown.

Congratulations to Megan Callahan and Austin Morrison of Mocksville, N.C. on their engagement. They became engaged on October 15, 2021, which was Megan’s birthday. Family and friends were together for her birthday when the proposal was made and accepted. Megan’s parents are Beth and Keith Callahan of Mocksville, N.C. (formerly of Whitesburg). Her grandmother is Linda Lucas of Kingsport, Tenn. Megan’s great-grandparents were the late Bernard and Minnie Vae Gibson Banks of Little Cowan.

Several of the Fields sisters went to Natural Tunnel in Duffield, Va. The photos I saw were beautiful. Those doing this trip were Ella Caudill, Helen Roberts, Libby Honeycutt, and Juanita Caudill.

Kathy LaMonte of Clinton, Miss., left on Thursday to go back home. I enjoyed being with Kathy for the month she was here. I did a lot of running around while she was in. Hopefully she will be back soon.

Debbie and Jeff Vice of Flemingsburg came in for a few days. We went to dinner with them on Thursday at Sazon’s Mexican Restaurant. It was good seeing them.

On Friday, Mike made chili and we had Debbie, Jeff, and John over for supper. It was great chili and a good time.

Debbie and I traipsed through Sandlick Cemetery on Saturday. We were looking for the headstone of our great-aunt Nora Boyd. I finally called our cousin Kathy LaMonte and asked her where it was located. It was the only corner we hadn’t checked. Along with Aunt Nora and Uncle Dee Boyd, there were headstones for Nora’s mother, Anna Victoria Bostic Gibson, and two of Nora’s brothers, Wilson and John.

I know I wouldn’t have made it with all the walking we did if I hadn’t had a walking stick.

Ella Mae Caudill sent me a recipe for Tanglewood Pie. Ella makes this a lot.

* Beat cream at high speed with an electric mixer in a medium bowl until soft peaks form.

* Beat cream cheese and 3/4 cup sugar at medium high speed with an electric mixer in a large bowl for three minutes or until smooth.

* Spread 1/3 of mixture into the pie crust shell.

* Cover and chill at least two hours or until firm.

* Bring to a boil. Reduce heat and simmer 4-5 minutes or until blueberries soften and everything is melted. (Add a little cornstarch if not thick enough).

* Put on pie and refrigerate.

Thank you for the recipe, Ella.

*one stick of butter

Sauté in skillet until onions are see-through.

Crumble big pone of cornbread in a dishpan. Add two bags of crouton dressing, two eggs, four heaping tablespoons of sage, and two boxes of chicken broth. (May not need both boxes of broth. Just add until mixture is moist).

Mix with hands until thoroughly mixed.

Add one teaspoon of black pepper.

Bake 350 degrees until edges are brown.

Donna also sent a tip: Always read the entire recipe before you begin.

Thank you, Donna, for the recipe and tip.

Imogene Johnson Bryant of Hazard passed away on October 15, 2021. She was 93 years old.

Arrangements were handled by Maggard’s Mountain View Chapel. The funeral service was held on October 18, 2021. Interment was at Englewood Cemetery, Christopher, KY.

Condolences are sent to Natasha and James Caudill of Hyden.

This week’s quote is attribute to Shira Tamir. “Anyone who thinks fallen leaves are dead has never watched them on a windy day.”

If you have any news to share please email Cowan- News@aol.com. Thanks.

Have a wonderful week and stay healthy.