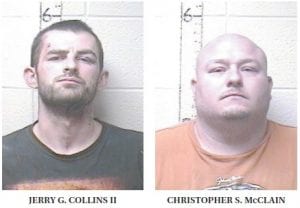 Letcher County Sheriff ’s Lt. Brian Damron said five people were involved in the fight, which took place in the parking lot of Parkway Inn and in a breezeway.

Three of the men were taken to Whitesburg Appalachian Regional Healthcare hospital. A Tennessee man, who is in stable condition, was admitted to the Whitesburg hospital.

McClain is accused of assaulting two people at the motel with what appeared to be a pool stick or similar object, according to information included in a citation written by Damron. Another citation written by Damron say Collins, who was also involved in the fight, became irate when Damron arrived and would not follow commands Damron gave to him while Damron was holding Collins at gunpoint. The citation says that when Collins’s father arrived, Collins charged toward Damron and Damron deployed his Taser, which was described as being ineffective. Damron then resorted to “hard empty hand strikes” as he attempted to take Collins into custody, according to the citation. Collins had a pink powder-like substance coming out of his nose and appeared to be “manifestly under the influence,” Damron noted in the citation.

Damron said Collins broke out a window in the motel.

Preliminary hearings for Collins and McClain are set for 1 p.m. on March 29 in Letcher District Court.

Damron, who has charge of the case, said more arrests are expected after the case is presented to the Letcher County Grand Jury.