‘Fight Night Round 4’ by a knockout 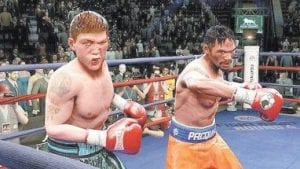 A boxing game looking to draw players the into the ring needs to make sure they feel in complete control of the fighter’s movements while providing graphics that live up to our ever increasing high-def expectations.

Whether you’re pitting George Foreman against Muhammad Ali for a “Rumble in the Jungle” rematch or seeing how Mike Tyson would stand up to Joe Frazier, you’re battling with legends who look and act just like they did in their primes.

Chasing the elusive Ali around the ring can be just plain exhausting, while a single left hook by Frazier could be the beginning of the end.

EA Sports took a chance by drastically overhauling the controls from 2006’s “Fight Night Round 3,” and it paid off.

The Total Punch Control scheme puts the right stick in charge of all punches. It takes practice but proves to be quite intuitive.

A simple flick prompts a jab or straight punch, while a flip movement can yield an uppercut or a hook. Pressing the “haymaker” button along with an uppercut or hook makes sure the blow inflicts maximum damage, as long as you haven’t drained your stamina.

Another button lets the boxer perform his signature move, but these should be used sparingly as each can take several seconds to pull off. My favorite is Tyson’s duck and quick left, which can catch an opponent who’s been enduring an endless string of rights completely off-guard.

There’s even a button for an illegal blow (a head butt or low blow — sorry, no ear biting). But you’ve got one, maybe two opportunities to sneak one in without a point deduction.

Regaining your balance after a knockdown using the two joysticks is easy the first time, slightly more challenging the second, downright difficult on a third fall to the mat and near impossible on four.

The slow-motion knockdowns are a thing of beauty if you’re the one delivering the blow, and the game lets you repeat the sequence from multiple angles to taunt your opponent.

What’s most amazing about this game is the importance of strategy. Random button mashing just won’t cut it here.

Your boxer sports three status meters — health, stamina and block — and you’ll need to constantly adjust your style to these levels.

It’s OK to engage in a barrage of continuous head punches, but if you drain your stamina meter you could be leaving yourself vulnerable for a single damaging upper cut that could turn the tables.

There are times to play it conservative with blocks and jabs while waiting for your window to deploy a more powerful blow.

There are also times when your opponent is so weak that you’ll want to keep throwing punches with wild abandon.

You’ll also need to play to your boxer’s strengths and be aware of their weaknesses. A fighter with a longer reach will want to keep their opponent at a distance, while smaller boxers do best by working inside while waiting for an opening.

The artificial intelligence of the computer-controlled fighters is OK, but this game really shines when it’s human vs. human. Online matches on a fast broadband connection are just as fluid as the local battles, so you’ll always find a willing challenger.

You can spend hours battling with the legends, but Legacy Mode offers a “Rocky”-like rags-to-riches experience. Create your own personalized fighter and work your way up from the amateur gym ranks for a chance to hit the big time.

EA Sports hit the mark with “Fight Night Round 4” by delivering stunning graphics, fluid and realistic animations and engaging controls. The varied venues, hyped boxer entrances, solid soundtrack and ringside commentary by Teddy Atlas and Joe Tessitore all add to the fun.