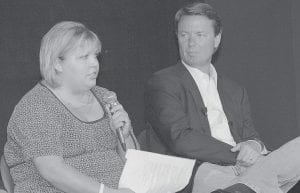 I just recently lost my grandfather to leukemia. He lived a long and really inspiring life. He was 89. He was a union organizer for the United Mine Workers and Appalachian Regional Healthcare. He was a self-educated man because that was all he could get but he was a very intelligent man and he always stressed the importance of education to his children and grandchildren.

When I myself took a year off from college, he didn’t pressure me or force me to go back but he encouraged me to go back because he knew it was important. He worked all of his life to overcome stereotypes that are often given Appalachian people and anyone who knew my grandfather knew he had succeeded at that.

When Robert Kennedy visited the area my grandfather traveled with him through the communities. He wanted him to know that although we might not be rich in the material sense, we are instead rich in heritage and culture.

And now that I am old enough to see how the world views my home, I want to carry on his message. I think education is the answer. Kids need to be taught that there is more to life than just prescription drug abuse, and there is more out there for us, and we need to be given the skills to know how to reach those goals.

Just last Christmas, whenever my grandfather prayed at our family get-together, he asked for peace in Darfur and Iraq, and I realized that everything I’d ever learned and all the skills I’d been given to do work, like on the One campaign, were skills that he had taught me from a very young age, and skills I had learned here in the Appalachian Mountains.

Today I am very nervous to talk to you. I am nervous that I’m going to say the wrong thing. I’m nervous I’m not going to do my home justice. But I take comfort in knowing that my grandfather is very proud that I’m at least here trying. And I’m asking you to see the good that we have here. And while we may not be a thriving metropolis, we are rich in culture and we know how to respect one another and treat each other fairly, and there’s no price you can put on that.

Willa Johnson is from McRoberts. These remarks were made to former Senator John Edwards on July 18 during a forum held at Appalshop in Whitesburg. The text was transcribed from an audio recording of that forum.