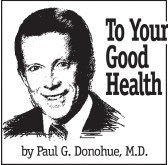 DEAR DR. DONOHUE: I hope you can help me with a problem that might get me kicked off the first string. I get cramps in my legs, mostly in the calves. At first, it was laughable. Now it’s not. At practices, I can sit down and wait for the cramp to go. During a game, I have to be replaced. How do I stop them? — B.L.

ANSWER: I have to tell readers that what I say applies to exercise-associated muscle cramps and not to the cramps that so many older people get when in bed. They’re both the same phenomenon, an involuntary, sustained and painful contraction of a muscle or muscles. But they’re not the same when it comes to the situation that brings them on.

The actual cause is a matter that experts have debated for years. A lack of potassium, calcium or magnesium, excessive exercise, cold weather, hot weather and dehydration have been cited as possible causes. None has been proven to be the universal cause. Muscle fatigue is another possibility. Some experts say that muscle fatigue affects the muscles’ response to spinal cord signals that prevent cramping.

Suggestions to forestall cramps are many. Hydration is a reasonable approach. An hour before a game or an exercise session, drink a quart of water. That gives enough time for the water to be absorbed. During play, keep drinking. If you are drinking a lot of fluid, switch to a sports drink to prevent a drop in potassium and sodium. Stretch your calf muscles in three daily sessions. Rising on the toes is a good calf stretch. You can try taking a vitamin supplement that contains most of the B vitamins. Make sure vitamin B-6 is included.

To uncramp a muscle, sit on the floor with the involved leg stretched out in front of you. Grab the ball of the foot, and, while keeping the heel on the floor, pull the foot toward you and hold it in that position until the cramp eases.

Pinching the skin between the nose and the lip can also break a cramp.

DEAR DR. DONOHUE: I have a Pap smear every year. I don’t have a cervix. My cancer doctor (I had breast cancer) said a Pap smear isn’t necessary for women without a cervix. I still have my ovaries and tubes and the rest of the plumbing. Do I need a yearly Pap smear? — K.R.

ANSWER: If a woman has had her uterus and cervix removed, she does not need to have Pap smears unless the uterus and cervix were removed because of cancer. Such a woman shouldn’t cut off all examinations with her doctor.