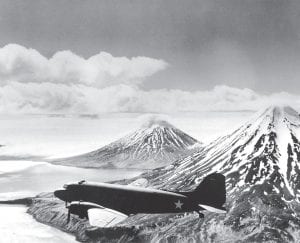 EDITOR’S NOTE: Known as the “Forgotten Battle,” the Aleutian Islands Campaign of World War II was little known because it occurred at the same time as the Guadalcanal Campaign in the South Pacific. The Aleutians, strategically located in the Alaskan Territory, were initially occupied by Japanese troops. Elmer Blair, then a hopital apprentice with the Navy, was there for the fighting between the Allies and the Japanese. His recollection of events appeared in the July 29, 1943 edition of The Mountain Eagle after Blair was commissioned a lieutenant (junior grade).

“If you can imagine someone shooting jagged slivers of ice straight at your face at 100 miles an hour then you’ll know how if feels to stand watch aboard ship in the Aleutians.”

What it’s like to fight in subzero weather and in 100-mile gales in Alaska was told by Lt. (jg) Elmer Blair, USNR of Whitesburg, at the U.S. Naval Reserve Officers’ Indoctrination School at Tucson, Ariz., where he graduated with the Eighth Battalion on July 12, 1943. 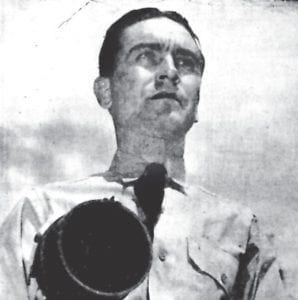 Shown operating a signal lamp as part of the training at the U.S. Naval Reserve Officers’ Indoctrination School at Tucson, Ariz., is Lt. (jg) Elmer Blair, USNR. He graduated from the school July 12, 1943 after receiving his commission during fighting in North Pacific waters. Blair formerly held the ranking of hospital apprentice first class. (U.S. Navy photo)

Returning from Alaska upon being commissioned to attend the naval training school, the former hospital apprentice first class served aboard a United States troop transport in far northern waters for four months.

Describing his experiences on his first trip to the Aleutians, Blair said:

“We were only three days out when we ran into typical ‘Jack London waves,’ monstrous seas whipped up by a 100-mile gale. The old ship took it pretty well, but the soldiers we were carrying didn’t.”

Continued Blair: “Suddenly late that afternoon, the ship took a gigantic wave head on. The green water foamed far over her bows, crashed against the bridge and poured down the ventilators into the forecastle.

“Water swirled over our bunks and through our lockers. I was scared to death, and thought we were goners for sure, but the pumps started working immediately and soon the water was gone.” 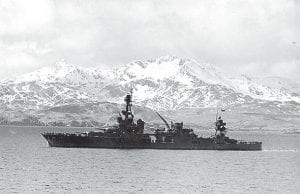 As a hospital apprentice, Blair had good opportunity to observe the effects of the rough weather upon the soldiers.

“The poor fellows were so miserable they would crawl into out-of-the-way places where, I guess, they thought they were going to die. A lot of our crew did too. We had to practically pry them out with crowbars to feed them a mixture of rhubarb and soda for seasickness. It did the trick,” he said.

Just dropping anchor at their destination, a formation of Zeros [Japanese warplanes] commenced an attack. Blair and a boatswain’s mate were standing on the top deck when the first bomb fell.

“The bomb exploded off our port bow and knocked a hole in the ocean that you could have placed a two-story house in. The next thing I remember, I was feeding ammunition to the gun at my battle station.

“I don’t remember how I got there. My reaction was instantaneous. We’d been drilled so often and so thoroughly in our duties and the position of our post that it had become automatic, a part of our lives,” he said.

According to Blair, his ship did not receive a direct hit. Although they were splattered with shrapnel, there were not casualties.

“During that first attack the men were tense and grim, and all were a little scared, but securing a second and last attack a few days later, the men ran to their battle stations grinning and eager to get a crack at the Japs. They’d had their baptism of fire, and all now thought they were hardened veterans. There was nothing lacking in their morale after that,” Blair said.

The soldiers and sailors got along together very well, Blair said, and often when the sailors were standing night watches in the freezing weather, a soldier would appear suddenly with hot coffee and doughnuts.

“Standing watch in Alaska is one of the most grueling of duties,” Blair said. “You can’t smoke even if your fingers could hold a cigarette in the frigid air. The winds, blowing at unbelievable speeds and full of sleet and snow and solid ice, tears at your facemask and shrieks, hollow and weird, through the rigging like a siren gone amok. After 35 to 40 minutes, your face and chest are covered with icicles.”

After 57 days at sea, Blair was granted seven days’ leave, which he spent with a buddy fishing for trout in the Alaskan streams. Returning, Blair received notice of his commission and sailed for the United States.

A graduate of Eastern State Teacher’s College at Richmond, Ky., he is married to the former Inez McKinley. Prior to entering the Navy, Blair taught science at Fleming High School.