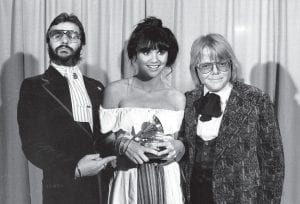 This 1977 file photo shows singer Linda Ronstadt flanked by Ringo Starr, left, and Paul Williams after she was named best pop singer for her album “Hasten Down the Wind” at The 19th Annual Grammy Awards in Los Angeles. A documentary, “Linda Ronstadt: The Sound of My Voice,” will premiere on CNN on New Year’s Day with additional showings later this week. (AP Photo)

Between the Kennedy Center Honors and a CNN documentary about her life debuting on television New Year’s Day, Linda Ronstadt is taking a career victory lap.

Ronstadt drew attention this month for a comment at a dinner for Kennedy honorees hosted by the State Department and Secretary Mike Pompeo. Ronstadt said she hadn’t planned to mention the Trump administration but did so to show support for fellow honoree Sally Field. The actress had remarked about living in an era where the idea of truth was being challenged, Ronstadt said.

“Half the room applauded and the other half sat in silence,” Ronstadt recalled. “I just wanted to say that I was in solidarity with her. I didn’t want her to stand up there by herself.”

During his remarks, Pompeo referenced a Ronstadt hit, “When Will I Be Loved,” saying he wondered when he’d be loved. When it was Ronstadt’s turn to speak, the 73-year-old retired singer tartly answered the question and said it would be “when he stops enabling Donald Trump.”

When will Ronstadt be loved? Now seems to be the time, with the well-received documentary, “Linda Ronstadt: The Sound of My Voice,” which airs on CNN tonight (January 1) at 9; January 2 at 12 a.m.; January 4 at 9 p.m., and January 5 at 12 a.m. Viewers will see that Ronstadt’s career had two distinct stages.

There was the rock star, sex symbol days with hits like “You’re No Good,” “Heat Wave” and “Blue Bayou.” Part two began with her 1980 New York stage role in “The Pirates of Penzance,” ushering in adventurous projects featuring jazz standards, traditional Mexican recordings and trio discs with Emmylou Harris and Dolly Parton. Despite the fear of record company executives, many of the projects did quite well.

She now lives a quiet life in the San Francisco area, her singing voice stilled by Parkinson’s Disease. Her last album, a collaboration with Cajun singer Ann Savoy that Ronstadt considers one of her best, was released in 2006. She performed her last concert in 2009.

“I didn’t do the work for prizes. I never took that into consideration,” she said. The recent recognition is “lovely, you know. I’m glad they like it. I like some of it and don’t like most of it. The good thing is it got better. My early work makes me cringe. Later on it got better.”

She also had an admirer in Amy Entelis, an executive at CNN.

“She was iconic in my life,” said Entelis, who is in charge of CNN Films, and therefore, in position to green light the Rob Epstein and Jeffrey Friedman documentary. It’s not charity work; biographies have done well for CNN’s film division, most notably “RBG” about Supreme Court Justice Ruth Bader Ginsburg, and others are in the works on Anthony Bourdain and Julia Child.

Ronstadt hasn’t been interested in cooperating with documentaries in the past but admired a film that Epstein had made about pioneering gay politician Harvey Milk.

Her participation was minimal, aside from narrating stories about her early life, including her Mexican heritage and family’s musical background, and a key final scene. Plenty of compatriots in the 1970s Los Angeles music scene were happy to talk, most notably J.D. Souther and Harris.

Ronstadt has deep roots in that scene; an early backing band eventually morphed into the Eagles. She paid Don Henley $250 a week to play the drums.

One of the things Entelis appreciates about the film is that the music is given a chance to breathe, that it’s not presented as an alltoo brief afterthought.

Filmmakers resisted the obvious temptation to make a tearjerker, to completely frame it around the cruelty of a peerless singer no longer able to sing.

“My book doesn’t even mention that I have Parkinson’s, so they didn’t dwell on it,” Ronstadt said, referring to her 2013 autobiography. “I don’t think it would be very interesting. A lot of people get sick.”

Still, with the film nearly done, Entelis said it was clear there was something missing. That’s what led to the final scene, which shows Ronstadt with her cousin and nephew in Mexico as they sing the song “A La Orilla de un Palmar.”

Harris says in the film that her old trio partner doesn’t miss making records, but does miss singing. The ache in Ronstadt’s eyes in that scene is where you can see what Harris means. Ronstadt mouths the words, but you can’t really tell what comes out.

Entelis hopes for a large audience on New Year’s Day, a strategically selected premiere date. On a day when people are relaxed and usually seeking an escape from news, entertainment-oriented films do well for CNN.

CNN released the film in theaters earlier this year, and it earned some $4.2 million, a strong showing for a documentary. “It’s safe to say that surprised us,” Entelis said. “It’s not that we didn’t love the film and thought it would be good for CNN, but we did not expect it to take off theatrically in that way.”

It surprised Ronstadt, too.

“When they approached me, I thought it would be a documentary film that would have one night on PBS and that would be it,” she said in an interview.

“I’m glad people like it,” Ronstadt said. “Sometimes they like things that aren’t very good and I think they only like it because they don’t have good taste. I think I know what I did. I’m happy with the good things I did and I wish the other parts were better, but I did my best.”